April 10, 2021
9 New Articles
Home NASL & USL Ottawa Fury “We have not accomplished anything yet” 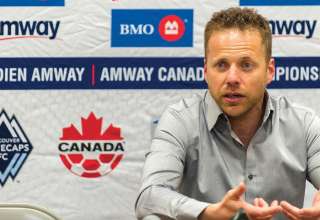 What a swan song for Marc Dos Santos, who has announced he will leave the Ottawa Fury at the end of the NASL season in order to secure a USL/MLS job in 2016. As we enter the stretch run of the NASL’s fall season, his team sits at the top of the league table. After a disappointing spring campaign and early elimination from the Amway Canadian Championship, MDS and his team have rebounded. In this Q and A, Dos Santos talks about NASL, the future of the Fury and his skepticism over a rumoured all-Canadian pro league…

PP: What do you think was the turning point of the Ottawa Fury’s season?

MDS: It was the week where we were knocked out of Amway and we also lost against Fort Lauderdale. In one week, we had given up nine goals in three games. We had a lot of new players. And, we looked at some of the problems in the way we were playing. There was a lot of humility. It wasn’t about the players in the back, but how we defended as a unit. Our lines were too far from each other. Maybe our players were thinking too much about offence, so we had to goback to our basics. We looked at our four moments of play and what we needed to do as a team. We assessed what was going right, we assessed what was going wrong and we did it with the utmost humility in the locker room.

PP: Since signing early this season, what kind of influence has Canadian national-teamer Julian de Guzman had on the club?

MDS: In the locker room, he is very good. He helps keep the players together in those key moments. Julian, as a player, is full of charisma, he is a great leader. And that goes for [midfielder] Richie Ryan, [goalkeeper] Romuald Peiser, [defender] Colin Falvey and [defender] Rafael Alves..

PP: Ottawa is at the top of the NASL fall-season standings. How does your mindset change when you’re leading rather than chasing?

MDS: We know what it’s like to be near the bottom of the standings. We know what it’s like to be 10th, to be ninth, to be eighth. Now, we’ve had a taste of what it’s like to be at the top — and not just for one or two weeks, but for four or five weeks or more. I can tell you this: There is no sense of ‘party’ in our locker room. None at all. We all know that we have not accomplished anything yet. We feel that this spot can be taken from us in the space of three games. Three straight losses and we fall right back down the standings. So, we are committed to playing every game like it is our last. We have to approach every game like a final.

PP: There has been a lot of talk about the possible formation of a Canadian Professional League. Do you think that’s the answer for Canadian clubs? Or is it NASL?

PP: The Fury are committed to playing Canadian players, and are in first place in the NASL fall-season table. How do you balance the need to win with the responsibility to give domestic players first-team minutes?

MDS: As a club, and it has always been like this for us, we are committed to giving incredible opportunities to Canadian players. Some have taken those opportunities, some have not. But here is an example. When Julian de Guzman went away on national-team duty, we didn’t go looking for an American or a Chilean or a Uruguayan to replace him. We looked at Mauro Eustaquio; we feel that this Canadian has all the abilities needed to be a first-team player.

PP: Ottawa and Edmonton are giving Canadian players regular minutes, but Canadian MLS teams aren’t offering the same kind of opportunities to domestic players. How does it change?

MDS: To be very honest, there’s very little the clubs can do about it. Look at the Montreal Impact. They got to the CONCACAF Champions League final, and they didn’t put a single Canadian player on the field. But there’s no doubt it was good for the club, no doubt it was good for the city. There’s a lot of pressure on a club president and there’s a lot of pressure on the coach. And while there are some Canadian fans who care about Canadians getting playing time, most of that pressure is based on results and getting that team to the playoffs. So, it’s the Canadian Soccer Association that needs the be the one that sets standard. And I think that starts in the Amway. I think if the CSA wants to, it can set standards, that there has to X number of Canadians on each club’s roster for the Amway, and that each club has to start X number of Canadians.

PP: Where do you see the club going in the future?

MDS: From day one, we established a model of play for the club. And that did not change no matter the coaches or players we brought in. We stuck to our model of play, even when there were growing pains, even when there were several losses in a row. We believed that, sticking to our vision, we would create the right identity for the club. We’d create the right visibility of the club. And if we keep feeding that model, and by that I mean that we keep improving every day, then there are no limits to where this club can go. When we started off we were playing in front of 1,500 people at Carleton [University]. And, now, the last few games we’ve played in front of 6,000 people. And, if we can make that model strong, it will continue. If I leave, it will continue. If [members of the coaching staff] leave, it will continue.