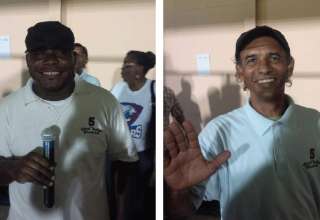 Even though he was speaking to the media from the national team’s training base in Ontario, the connection sounded as if he was trying to even get one bar of reception while he sat in what was left of a decommissioned bunker in Chelyabinsk.

Sadly, there were only three journalists on the call.

Canada was less than a week from kicking off its third-round qualifying World Cup qualifying series, with Belize providing the opposition, and the interest in a national telephone press conference had hit a low point.

After a second consecutive Gold Cup exit at the group stage — in which Canada didn’t score goal — excitement over our men’s national team isn’t exactly at it’s zenith. Add to that a lot of cheer-for- Canada fatigue after the summer’s Women’s World Cup and Pan Am Games, and we’ve created a solid recipe for disinterest in CONCACAF World Cup qualifying.

Watching Canadian soccer has become the sporting equivalent of being into doom metal; you can find a small community of followers out there on the Internet. You bond. And, because you all listen to a lot of doom metal, you fool yourselves into thinking the genre is a lot more popular than it is. You wonder why major record labels aren’t snapping up the loudest and most drone-like of the doom-metal bands. You shake your fist because it isn’t accepted by the mainstream; because you all know deep, deep inside that, if given the chance, doom metal would become bigger than Rihanna.

Likewise, soccer fans wonder why TSN isn’t banging down the door to snap up the dormant broadcast rights for national-team games after Sportsnet got out.

So, 10,000 and change came out to see Canada beat Belize 3-0 in the first leg in Toronto. And a few hundred of us gathered on the Internet to chat about the neededto- be-seen-to-be-believed feed of the second leg, courtesy Channel 5 Belize.

Thanks to the most awesome commentating job in the history of broadcasting, Mad Bull and Maestro — Channel 5’s play-by-play and colour men — became cult heroes, and those few hundred Canadian fans scattered about on social media used the occasion to bring them even closer as a community.

We no longer complain about being forced to watch national-team games on pay services somewhere past channel 250; now, those feel like the good old days.

Yes, Mad Bull and Maestro and the two-minute ads for Benny’s, the Belizean hardware and appliance chain (with the now sorta-famous slogan, “Yo Got Dat Right!”) were awesome. But the greater truth was the only way to access our national team’s road game was to depend on a transmission from Belmopan that looked like it was coming from Cuba. In the 1970s.

Actually, the last time I watched a sporting event of comparable (video) quality, it was Cuban baseball league action.

So, as unifying as the Belize broadcast was for some of us, it wasn’t close to the mainstream Canadian consciousness. Celebrating Mad Dog and Maestro is like a small group of those doom-metal fans sitting around and hailing the new Sunn O:))) record as the best thing ever.

Canada will host Honduras in Vancouver in November, kicking off the fourth round of CONCACAF qualifying for the 2018 World Cup. With the Canucks in season, the Whitecaps possibly pushing for a deep run into the playoffs, will our men’s national team get buried again? If there are more than three journalists at any of the the press events leading up to the next game, it’s a win for the program.