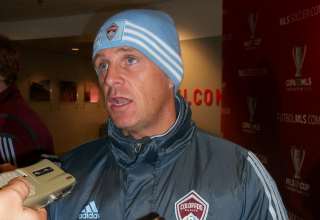 “I think he’s feeling the pressure a little bit,” the Rapids coach deadpanned after being asked how his team planned to stop FC Dallas’ elite playmaker. “Everyone is speaking about him. He’s the MVP.

“I can only imagine what kind of weight is on those shoulders. It must be very hard on the lad.”

Oh yes, the headgames have begun. And Smith wants to ramp up the pressure on Ferreira.

Former Toronto FC back Marvell Wynne, who has been a major success with Colorado after being converted to centre back from the right side, was more direct about the Rapids’ stop-Ferreira plan. He knows that Ferreira will make runs into the box from his attacking midfield slot and, if the defence offers any gaps, Ferreira will find the striker with his pinpoint passes.

“The thing is not to give him any time on the ball,” said Wynne. “We can’t allow him to pick and choose and take his time.”

When Wynne was dealt from Toronto FC to Colorado, he had less than 24 hours to prepare for his first game as a Rapid. Because Smith was short at centre back, he asked Wynne to play there, and he’s stayed there all season long.

The change wasn’t as difficult as Wynne imagined.

“I can be involved in all the plays on the field.”

The Rapids won the Eastern Conference Final last weekend in sub-zero temperatures. So, if the weather gets cold tomorrow, it should prove to be a big advantage for Colorado. And if the infamous BMO Field wind begins to blow off Lake Ontario, the Rapids are ready for that too — it won’t affect their crosses to target man Conor Casey.

Defender Kosuke Kimura said it wasn’t just last week’s game that prepared the Rapids for the cold; it’s the springtime training sessions that are held long before the snow melts.

“In Denver it gets very windy too, and it stays very cold,” said Kimura. “When it comes down from the mountains, the wind blows so strong and fast. I Colorado we get the wind chill. It (BMO Field conditions) won’t make much difference in our game.”

And, for the time off the field, Wynne is a valuable resource. He spent the better part of three seasons with TFC, and he’s acting as a tour guide for the Rapids.