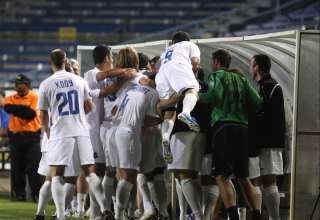 FC Edmonton wants to prove all the naysayers wrong. The club made an impressive statement Saturday, going on the road and beating the Fort Lauderdale Strikers 2-1 in their NASL opener.

Substitute Dan Antoniuk scored the winner off a scramble in the box.

“We’re confident, we’re a little bit cocky,” said midfielder Shaun Saiko, who scored on a 25-yard screamer to draw FCE level in the second half. “We want to show everyone that we can play professional football at a high level. We went on the road and got the result. Everyone is picking us to finish eighth, and Fort Lauderdale is supposed to be in the top three.”

And, if anything, the only injustice on Saturday night was that FC Edmonton didn’t win by more. Right from the opening kickoff, coach Harry Sinkgraven’s 4-3-3 formation was giving Fort Lauderdale fits, as FCE controlled possession through much of the first half and created a majority of the chances. Striker Alex Semenets was twice robbed by Strikers’ keeper Nic Platter — once on a volley from the left side of the the penalty area, and another chance where an sloppy pass on the back line set him free. Strikers defender Adam West also cleared another chance off the line.

But, despite the dominance showed by FCE in the first half, it had to settle for a 0-0 scoreline, and then came out sluggish in the second half.

“We were really disappointed by how we came out in the second half,” said Saiko. “We wanted to create some chances early but, instead, we let them dictate the pace. But we showed some resilience, we came back and got the three points in a hostile environment.”

The Strikers attracted 6,402 fans to Lockhart Stadium for the opener.

The Strikers got the opener when defender Martyn Lancaster got his head to a corner at the top of the box, and the bounding ball eluded keeper Rein Baart and crossed the goal line before it could be cleared away. The ball never made it to the back of the goal, but it crossed the line.

But, instead of folding, FC Edmonton ramped up the pressure. Saiko, the man of the match, pulled the strings in the midfield. Then, he stunned the home crowd on a thunderous strike from 25 yards away that swerved away from Platter and into the goal.

Just minutes after coming in for starter Conrad Smith, Antoniuk, a Division-2 soccer veteran who spent a season with the Montreal Impact, got the winner.

“The ball was scrambled, and Saiko was able to poke it free. That gave me the chance to get in there and finish it,” said Antoniuk. “It was important I get it off quick. I was able to put it into the corner. I didn’t have to hit it hard.

“I came into the game thinking that I am going to score. That’s the way I always think, whether I am starting or coming in off the bench like I did today. That’s the mentality you have to have as a striker.”

Alex Semenets could have made it 3-1, but his late effort smashed off the woodwork.

Baart showed off some unconventional goalkeeping, too. On several occasions, the Dutch veteran came well out of the box to take opportunities away from the Strikers’ attackers. But, to his credit, he was able to make his mind up quickly and get to the loose balls.

It was a historic kickoff to the NASL season for FC Edmonton, which don’t play in the Alberta capital until its April 27 Nutrilite Canadian Championship date with Toronto FC. Despite playing a schedule of friendlies in 2010, despite having a full roster before most of the other NASL clubs, despite getting players with European experience like defender Eddy Sidra and Saiko, FC Edmonton has been forecast to finish at the bottom of the pack in NASL and to get thumped by TFC in the NCC.

But, after scoring goals in bunches in preseason, and putting on an impressive display in the first game it played that counted in the standings, the club may finally be winning over some cynics. And, make no mistake, this was an entertaining, engaging game of soccer. Edmonton fans worried that FCE might be the Aviators part deux now have proof that things might be different — that FCE is willing to press.