September 24, 2022
9 New Articles
Home Canadian Soccer The Association A head for the game 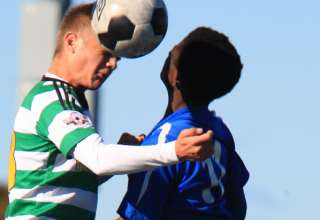 Soccer officials in the United States are moving to ban heading of the ball in youth soccer. Similar measures have been debated in Canada — but we’ve decided to go with an approach that stresses education over regulation. But, is there hard, peer-reviewed evidence out there that supports the notion that heading the ball leads to brain injuries?

For those of us who remember our youth-soccer days, learning to head the ball was a rite of passage.

We all remember being told to not be afraid of the ball, to keep our eyes open, to attack the ball. If we did make contact awkwardly — and it hurt — we laughed it off through gritted teeth. Really, no part of the game gave you the chance to prove how brave you were than leaping up to meet a ball with your head. If you shirked away, your teammates would guffaw and say that you were afraid of the ball.

We’ve come a long way when it comes to teaching the game to our children. We understand that they need to work the ball along the ground, first. They should work on controlling the ball, passing the ball, shooting the ball. They should have fun doing it, too.

But, in the United States, common sense approaches will be replaced by a legislative approach. This past autumn, US Soccer came to an out-of-court settlement with a group of parents who had launched a suit that claimed the body hadn’t done enough to protect their kids from concussions. And, out of the settlement came a new set of rules.

This is what US Soccer released: “The United States Soccer Federation and the other youth member defendants, with input from counsel for the plaintiffs, have developed a sweeping youth soccer initiative designed to (a) improve concussion awareness and education among youth coaches, referees, parents and players; (b) implement more uniform concussion management and return-to-play protocols for youth players suspected of having suffered a concussion; (c) modify the substitution rules to insure such rules do not serve as an impediment to the evaluation of players who may have suffered a concussion during games; and (d) eliminate heading for children 10 and under and limit heading in practice for children between the ages of 11 and 13.”

It was clause D that shocked the soccer world. Heading will no longer be part of the game for young American players. For Canadians, it presented an interesting challenge; we are America’s neighbour, and we’re often affected by the decisions Americans make. We send Canadian teams to American tournaments. Americans teams come to Canadian tournaments. Now, the Americans will be playing by a different set of rules.

But, the heading debate isn’t new. In fact, when the Canadian Soccer Association discussed it’s long-term player development (LTPD) strategy, a heading ban was on the table.

“This matter has indeed been discussed by our LTPD work group,” the CSA stated in response to an inquiry from this magazine. “It is a very sensitive matter that has raised various responses from numerous experts.”

But, instead of regulation, the CSA opted that education was the best way to go. With the Coaching Association of Canada, it created an online course for coaches to educate them about concussions.

According to the CSA, there are many factors that determine if a player is at risk of concussion or not. The size of the ball and the speed of the cross make a big difference. Is a U-10 kid going to be heading a size five ball that’s been whipped in from the corner by an adult? Likely not.

“If we look at the matrix introduced in the Volume 2 of our LTPD resources back in 2011 title Wellness to World Cup, there was a reference made to introducing heading for passing at the age of 10. Given the smaller field sizes in the early stages of a player’s development, and the shorter distances it requires in wing play, heading at these ages should not factor much.

“There are a number of other factors that may be considered with head injuries: ball size and pressure, out-of-soccer head injuries history, etc. The discussion at the LTPD work group was highly animated and both sides thoroughly debated, especially since this issue is one that European countries – footballing nations – do not seem to see as a threat.

“Ultimately, at this stage, Canada Soccer has opted for an educational approach rather than regulatory, as we believe the more informed people are about identification and prevention of head injuries, the better environment this will create for our athletes at all ages.”

Dr. Dhiren Naidu has led a team at the University of Alberta that has spent years studying concussion in sport. Naidu has presented his findings to hockey-helmet manufacturers, the National Hockey League, USA Hockey and Hockey Canada. In 2014, he and medical student Rehana Murani, who played for Canada’s U-20 women’s team in 2010, reviewed work that had been done on concussions in soccer.

Naidu says that he has yet to see any research, though, that directly links heading in soccer to concussions. There has been some research that suggests that wearing head protection can decrease force, but Naidu stresses that it doesn’t necessarily translate into decreased concussions.

“There have been some studies on headgear in soccer reducing impact of head-to-head force, but not decreasing the impact of concussions,” he says.

Jeff Paulus is FC Edmonton’s assistant coach and heads the team’s academy. Before coming to FCE, he led the NAIT (the Northern Alberta Institute of Technology) men’s team to a national collegiate championship.

He says that, by nature, coaches aren’t going to have small children heading the ball in training. But he says it’s also difficult to create a culture where kids will be taught to shy away from balls in the air.

“I believe there are more important technical elements you can and should be working on at U-10,” he says. “Question is, how do we teach young players to not be scared of the ball when they are U-14? I have mixed feelings. I think it can be dangerous when when mom or dad coaches believe an eight- or nine-year old should be heading the ball like John Terry. (But) there is a safe way to teach children the proper technique without risking damage to them.

“I also do believe however that of we want our young players dribbling, attacking one-v-one, and passing and receiving the ball to work on their technique, do we really need to worry about them heading the ball at that age?”

The Americans are changing the game not based on the available science, but because of litigation. Canada has put an emphasis on education. We’ll know in a generation if the American plan sees their players regress, progress or stay about the same when compared to youths playing soccer in the rest of the world.