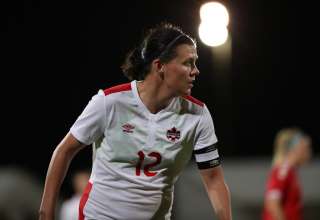 Christine Sinclair used her left foot to place a shot neatly inside the far post. The goal stood as the winning tally as Canada beat Russia 2-1 Friday at the Algarve Cup.

It was the 167th career international goal for Sinclair, the No. 2 all-time international women’s goal-scorer in history. Her goal came after Sophie Schmidt had got Canada on the board early in the first half, cleaning up the garbage after Deanne Rose got an initial touch on a ball in the penalty area. Rose beat two Russian defenders to win that first ball, and Schmidt streaked in off a near-post run to hammer the ball into the roof of the net.

That set the stage for Sinclair’s tally.

Darya Makarenko pulled a goal back for the Russians midway through the second half, but the Canadians held on.

Alex Lamontagne earned her first senior international cap for Canada when she came in for Janine Beckie in the second half.

Youngster Kailen Sheridan got the start for Canada in goal. Canada is now 2-0-0 in the tournament.