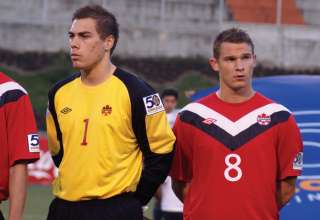 When Ethan Gage left the Vancouver Whitecaps for Reading, the former Canadian U-20 Player of the Year had high hopes for his career. Instead, it was a disaster. He’s spent years in Scandinavia rediscovering a passion for the game, a passion that he’d lost in England…

Winning the Canadian U-20 player of the year award doesn’t mean a golden road of soccer success lies ahead.

Ask Ryan Gyaki, who won it in 2005 and then blew out his knee. Nana Attakora won the award twice, and is currently not a guaranteed starter on his NASL team, the San Antonio Scorpions. And what of Ethan Gage, who won it in 2010? The Cochrane, Alta.-born midfielder left the Whitecaps soon after winning that award to go on a successful trial with English side, Reading.

After signing the contract, his career took a sharp left turn. He was banished to the reserve squad. He felt alone, isolated. He couldn’t understand why he’d been frozen out of the team. Outside of going to training, he didn’t leave his residence. He didn’t make friends. He wanted to quit.

“In England, I was 19, 20, about that age,” Gage recalls. “And it’s really a different world compared to North America, the mentality and things. I was fairly young and I, mentally, couldn’t handle it.

“I joined them halfway through their season, I trained with the first team every day.. I went home for Christmas and I came back and I thought I’m going to break through to the first team, I am going to work super hard.”

It didn’t work out that way.

“But I didn’t know that the club we’re testing me mentally,” Gage says. “So, they were kicking me down to the reserves and sometimes even with the juniors, just testing me for months. And I did not know how to handle it. I tried so hard to get back to the first team and it didn’t matter how hard I worked, I wasn’t given a chance. Again, they were trying to see what I was made of and, in the end, mentally I couldn’t handle it. I started having more and more bad practices and I didn’t enjoy football anymore because I didn’t know what I was doing wrong. And I really, really struggled in my head with that. I was all alone in England. I didn’t have anybody. And, when you’re scared and homesick and all these sorts of things, you start sheltering yourself, staying indoors more, keeping to yourself. And that’s exactly what happened. I started beating myself down too much, I didn’t enjoy it anymore, I didn’t want to play football anymore.”

Reading has a bit of a history with Canadians and tough love. (And, in this case, it’s probably the loosest meaning of “tough love” one can possibly apply to the term). In his book, Bob Lenarduzzi: A Canadian Soccer Story, the current Whitecaps president described his time as a youth player in Reading. He wrote about having to clean garbage out of the dressing room and polishing the first-team players’ boots. In England, the old-school knock-them-down-and-build-them-up-again ways hadn’t changed. Not for Lenarduzzi. Not for Gage.

And, when Gage was knocked down, he didn’t get back up. He wasn’t at all surprised when Reading decided to release him. He says that the club was right to do it.

But, a new agent convinced him to give the game one more chance; to go down a few levels, play lower-level soccer in Sweden, and see if his new client could rediscover his love for the game. Gage signed with Nyköpings BIS, in the Swedish fourth tier. The first year he was there, in 2012, the team was promoted to the third tier. And, as he remained in Sweden, his confidence returned.

“I joined halfway through the season we got promoted and I ended up staying one more,” says Gage. “That second year I was there, I’m really not trying to brag or anything, I really killed it. I was in the top 11 in the league, they made a starting 11 in the league and I was named into that. People were saying ‘you’re going to get picked up no problem’ and that I didn’t belong in this league.”

But, the bites didn’t come.

“Clubs were interested but, for whatever reason, nothing came of it. But, that’s how football goes. I thought to myself that there’s a reason for this and lessons for me to learn. So I ended up staying another season, and it was the same story. I killed it, I did very well and, again, there was interest, there were a couple of clubs that just didn’t have enough money. There was one club in the Superettan [Swedish second division], they’re in first place, they really wanted me, but they didn’t have enough space. They were trying to get rid of some players so they could get me, but those players didn’t want to leave. There were a bunch of problems, so I just had to to get out of there.”

In 2015, Gage moved east from Sweden to Norway, where he signed with second-division side Baerum SK. But, Gage has missed most of the season due to an injuries.

“I got injured right before the season started,” he says. “I tweaked my ACL in our preseason camp in Spain. After about a month I was able to play, and I played about 30 minutes against Simon’s team [Strømmen is where Canadian keeper Simon Thomas plies his trade]. I was just getting back, feeling great, it was awesome. And then we played a Cup game, I started, and then I pulled my hamstring, on the same injured leg. I didn’t feel any pain in my leg or my knee or anything for about three or four days, played the Cup game, jumped up, landed on my left leg, and I pulled my hamstring. So, on the same leg, I have an ACL and a hamstring issue. And that has taken way longer than I ever expected. I was expecting to be back months ago. It’s been a big struggle for me. It was funny because my hamstring would feel fine for a time, then the pain would go back to my knee, different parts of my knee. I didn’t know what was going on. It was crazy. And our physio was a bit confused by it, too. The combination of the two injuries on the same leg has really made it tough; I’ve been out for four months, almost.”

But, he says the wisdom he’s gained from the Reading experience — and the years after that — have helped him deal with the adversity that 2015 has sent his way.

“It’s definitely been another mental challenge. But I’m just getting back into the starting lineup, but, mentally, I am still not as sharp and I’ve got to get my touch and all these things back, still.

“But, I was thinking about it the other day. I like Norway, I like my team, but life, here, it’s definitely been a struggle — mainly because of the injury. And, with that, a lot of other things, a lot of other smaller issues, they become big issues. That’s because I can’t play football. My life here has been two or three times harder than it was in England, but I have grown a lot mentally and I’ve been able to deal with that in a mature manner and I’m proud of myself in that matter.”

Let’s rewind back to 2009; Gage was a teenager who played for Canada in games against Mexico and Costa Rica in the CONCACAF U-20 Championships. In 2011, he started all three round-robin games. He had left the Whitecaps, still a North American second-division side at the time, for a couple of trials in Germany that didn’t pan out. He says he’s thankful that the Whitecaps brought him back in the fold.

Colin Miller, current coach of FC Edmonton of the North American Soccer League, was on the Whitecaps staff when Gage was in Vancouver. He recalls a player with lots of potential.“I always rated him when I was there,” said Miller. “I thought that this was a player who could make the jump to the next level.”

“In all complete honesty, I had no idea I was even up for it,” says Gage. “I don’t look into those sort of things, awards and all that. I had no idea until I got a call from someone, ‘yeah, you won, we’re sending you a gift certificate and a camera.’ And I was like what? What did I win?”

But, Gage’s stints with the U-20 program never led to senior call-ups. And, playing in the lower divisions of Scandinavia is not going to put Gage on the radar of national-team coach Benito Floro.

“Ever since I was in England and then I went to Sweden, I definitely dropped a few levels,” says Gage. “I wasn’t sure if I wanted to play any longer. I’m working my way back up. I’m not worried about national team and stuff — that’s not a priority of mine.”

If football hasn’t worked out the way Gage thought it would, the European lifestyle has been to his liking. He’s been able to live his life on his own terms; since he was a teen in Alberta, he dreamed of living across the Atlantic. It’s not a lifestyle he wants to give up.

“That thought [of coming back to North America] has not crossed my mind. MLS and over there is definitely getting a lot better and that’s a great thing. But, for me, I’ve always had a passion for Europe. As I’ve been growing up, as you do grow up, you learn a lot more about life. Don’t get me wrong; I love what I do and I don’t want to stop. But, at the same time, I want to enjoy my life, I want to see the world and stuff like that.

“My dream is to go live in a hot country, I’d love to go to Turkey or Spain or Greece. I’d love to live in one of those vacation countries and play in a place like that and live my life over here. I feel that I can always go back to North America when I choose to; at the moment I don’t want to go back, no.”

What Gage has to do is get healthy and continue on his comeback trail. At 24, he looks to have found peace with himself. And maybe that’s more important than how well he kicks a ball or marks a man.