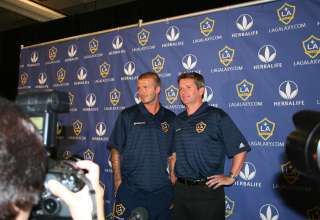 Frank Yallop with David Beckham in 2007.

If anyone can relate to the tough task that lies ahead for Canadian head coach Stephen Hart in qualifying for the World Cup, it’s Frank Yallop. The former Canadian international and head coach — and current San Jose Earthquakes coach — spoke about Canada’s chances in World Cup qualifying which begins on Friday against St. Lucia.

“Very good chances, hopefully,” said Yallop about the current national team qualifying for the 2014 World Cup in Brazil. “I just wish the best for the Canadian team and hope they play well on the weekend and go through.

“I think Will Johnson is a good young player in our league (MLS) that can hopefully do it for Canada and I think Dwayne (De Rosario) is fine form right now.”

Yallop was born in England but grew up in Vancouver. As a youngster, Yallop was actually talented enough to represent England and play on the national youth team in 1982. However, as a senior he decided to play for Canada and made his international debut in 1990. He was capped 52 times in an international career that lasted seven years while representing the red and white. Over that span he was a regular on the defence and played in every match he was available from his debut to the end of qualifying for the 1998 World Cup.

However, Yallop also believes that the team really needs the support from its fans – something that has plagued the program for many years now.

“I think what we need to do and make sure that we – and this goes out to the fans – make sure you support the team. I think that’s important where a lot of times we’ve played in Canada and not had that real vocal Canadian support and we need that.”

Yallop is one of the few Canadian players to ever play in the highest competition in England in the ‘90s. When he returned to England to play professionally, he achieved a lot of success having played in 387 matches over16 seasons in for Ipswich Town in the English Premier League and First Divisions. As a defender, he scored eight goals over that period and also played three matches for Blackpool while on loan.

After realizing his career in England was drawing to an end, he signed a contract to play for the Tampa Bay Mutiny of the MLS in the summer of 1996, the first year of the league. He played until 1998, before becoming an assistant coach with the club and then moving on as an assistant with D.C. United in 2000.

The next season he became the coach of the San Jose Earthquakes and led the team to an MLS championship and repeated the feat once again in the 2003 season — a team that leaned heavily on Canadians Dwayne De Rosario and Pat Onstad.

In 2004, he left the Quakes to become the head coach of the Canadian national team. His coaching career with the national team did not last very long as he became increasingly frustrated with how with his philosophies often differed from the way the national program was being run at the time. As a coach of the national team, he had a record was 8-9-3 but resigned in 2006 to take an offer to coach the LA Galaxy for a return to the MLS.

In 2007, his contract was bought out so he could once again become the head coach of the Earthquakes which was being revived for the 2008 season. Yallop has held that post sinc,e but still keeps tabs on the national team and keeps in touch with Stephen Hart who coached the junior teams when he coached the senior team.

“I follow online, I speak to Stephen Hart, not a lot, but probably every six or so weeks and we touch base and say ‘hi’ and see how’s it going,” said Yallop. “I know how he feels at times, the preparation and stuff.”

Although Yallop enjoys coaching in MLS he also doesn’t rule out the possibility of one day returning to coach the national program in the future.

“I would never rule that out,” said Yallop. “I had my reasons to move on – I got a good offer from the Los Angeles Galaxy to go there. And I was a little frustrated, if you like, with the makeup of what was going on and felt I was always against it with how I wanted to go about it – we were up against it. So my reasons were what they were, but I would love to go back at some point. Definitely, I think it would be something fun to do and really enjoy it and try to get to the World Cup.”

Yallop will be paying very close attention to the fortunes of the national team in its six matches in the second round of qualifying in CONCACAF. The first Group D match kicks of at 8 p.m. ET Friday from BMO Field against a relatively unknown St. Lucia squad while Puerto Rico and St. Kitts and Nevis round out the group. All three of its Caribbean opponents are ranked lower than Canada and Yallop doesn’t see the team having too much trouble advancing to the next round where the competition will become much tougher.

“My thoughts are always with the Canadian national team, obviously coaching them and playing for them was a great honour so I’m very much looking forward to the game. Hopefully we can get a good result and go through and then look forward obviously to the real qualifying when it starts.”