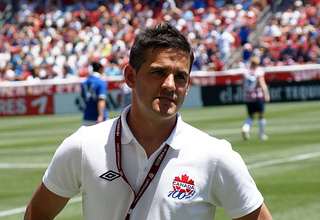 Canadian national team coach John Herdman said he doesn’t know exactly who or what FIFA is investigating in the wake of Monday’s 4-3 extra-time loss to the United States.

In a conference call with media Tuesday, the Canadian Soccer Association announced that the team will not be making any more comments on the officiating in that semifinal game. The CSA also confirmed that it will not be challenging or protesting the decision.

FIFA has confirmed that it is investigating incidents after the match — which bring the question of whether or not any disciplinary action will be taken towards the Canadian players, including forwards Christine Sinclair and Melissa Tancredi, for comments made about Norwegian referee Christina Pedersen. With Canada up 3-2 in the second half, Pedersen called Canadian keeper Erin McLeod for delaying the game. Then, on the ensuing free kick, a penalty was awarded after Megan Rapinoe’s drive smashed off the arms of Diana Matheson and deflected off the hand of defender Marie-Eve Nault.

But, while FIFA has confirmed an investigation, Herdman said he is in the dark what the process is all about.

“I’m not absolutely clear on what is being investigated,” said the Canadian coach.

Herdman said that, despite playing 123 minutes of fast-paced, intense soccer on Monday, he hopes to have his core of starters ready for Thursday’s bronze-medal match against the French. France beat Canada 4-0 at the 2011 Women’s World Cup, then triumphed 2-0 over Big Red in the 2012 Cyprus Cup. But, if FIFA decides to suspend any of his players, well, according to Herdman, expecting the unexpected is part of playing in tournaments.

“Tournaments are tournaments. Things happen in tournaments that you never predicted… But we’ll be where we need to be by game day.”

But, if FIFA is investigating the Canadian players for comments made to the media after the game, Herdman said he hoped officials would show “empathy” for what the players had been through. They were devastated after an emotional loss — and it would be unrealistic to expect heartbroken players to measure their words when the cameras are shoved in their faces just minutes after the Alex Morgan 123rd-minute match-winner.

“To see the girls last night, they were broken,” he said. “And then they have to go out in front of the media.”

And, when told that American striker Abby Wambach was actually counting out the time that McLeod was holding the ball — coaxing the official into the call, Herdman didn’t complain. He said “good on her” for “finding a loophole” and using it to her team’s advantage.

“It shows that she’d do anything to win a football match.”