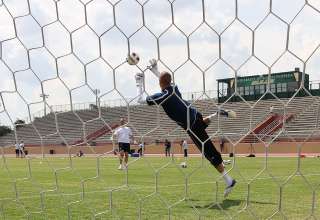 Milan Borjan’s debut season with Turkish side Sivasspor is on hold; but the Canadian national goalkeeper is excited to get Canada’s World Cup qualifying campaign off to a winning start.

Borjan and the 18 other members of the Canadian national team are in Alliston, Ont., training ahead of Friday’s World Cup qualifier against St. Lucia at Toronto’s BMO Field. The team then plays in Puerto Rico on Sept. 6.

For Borjan, it’s a chance to play competitive soccer… finally. After a great season with Serbian side FK Rad, Borjan transferred to Sivasspor, which finished just above the relegation zone in the Turkish league. But, just like Canadian teammates Mike Klukowski and Josh Simpson, who also play in Turkey, Borjan has had to ensure an enforced extension of training camp. Turkey is reeling from a match-fixing scandal, and the season won’t start until Sept. 9. Fenerbahce has already been banned from the Champions League.

“It has been difficult, training twice a day for the last two months,” admitted Borjan. “We (Sivasspor) have played a lot of friendlies; we have just finished a tournament in Antalya. All of us are really looking forward to our first match. The team didn’t do that well last season and we want to do better. The club has made a couple of signings and I think we will be a good team this year. As for the league, I wasn’t here last year. So I can’t say much, I don’t know a thing about it. But people tell me that Sivasspor are a good club, that it isn’t one of the teams that would take money, that it’s a clean team.”

And, Borjan, who came to Canada with his parents 11 years ago and now calls Hamilton, Ont. home, says he and his Canadian teammates are ready to erase the bad memories of the Gold Cup. Borjan started two of the matches — including the draw with Panama that sent Canada home early.

“We had a lot of bad luck in the Gold Cup in the Panama game and the game against the United States,” said Borjan. “But that’s the way the sport goes. But the guys, we are looking forward to a good run of games now. We are excited.”

One of the oldest clichés in sport is the “can’t worry about the other team, just have to look after ourselves” adage. But, in Canada’s case, it’s especially true. The Canadians don’t know a lot about St. Lucia or St. Kitts and Nevis, who it faces later on in this round. Seven members of the NASL’s Puerto Rico Islanders play for the Puerto Rican side, so it is a little more familiar to the Canadian players who would have faced them in league play (Terry Dunfield in his time with the Whitecaps; the Whitecaps were knocked out of the Div.-2 playoffs in 2010 by the Islanders) or the CONCACAF Champions League (Dwayne De Rosario; TFC was eliminated by the Islanders in 2009).

So, for Borjan and the majority of the Canadian players, it’s a case of focusing on doing what you do well.

“I don’t know much about their teams. But I know that we are ready to go. We are ready to win both games. We are pretty excited. There’s been a real good feel to camp (in Alliston) and we are really pumped up.”

And while Borjan wasn’t born in Canada, he has a deep emotional connection to his country. When you talk to the goalkeeper about what Canada has meant to his life, you have to wonder about anyone who fretted about getting him capped so he’d be tied to Canada for good, which became a cause celebre during the Gold Cup.