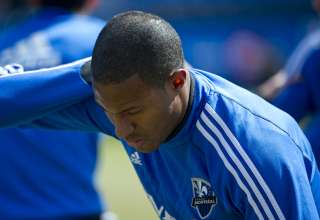 Maybe the next time a referee prepares to send off an opposing player, the Montreal Impact should ask the official to put the red card back in his pocket.

For the second week in a row, the Impact gave up a game-winning goal to an opponent that was down a man. Last week, it was at home to the New York Red Bulls. On Saturday, it was on the road to Colorado, as Jaime Castrillon got a controversial late marker to give the 10-man Rapids a 3-2 win.

“Controversial” is an understatement.

Make no mistake. Castrillon’s goal was one of the weirdest you will ever see. But it should never, ever have counted. Why? It came after referee Mark Kadlecik blew the whistle and indicated that the ball was out of play. Even though Castrillon nodded the ball into an open goal after the referee had blown the play dead, the goal was allowed to stand.

MLS, often unfairly, gets criticized for its level of officiating. Truth is, we see bad calls made in leagues around the world. But this wasn’t a case of a missed call. This was a referee blowing a play dead, then deciding to allow a goal to stand that was scored after he made that decision. Basically, this was a case of Kadlecik writing his own version of revisionist history.

Now, for me to discuss a referee’s mistake, it takes some work. I pride myself that I don’t often stoop to what is often the lowest common denominator in sports journalism — blaming the refs. And the refs I have spoken to over my career are harder on themselves than the fans are. They watch replays of their work. They go over what they got right… and got wrong. And the good ones will be bothered by something as small as realizing they gave a throw-in the wrong way.

But, that being said, MLS must act quickly and harshly with Kadlecik. Again, this wasn’t a case of missing a call, this was a case of blowing the whistle, pointing for a corner kick, and then telling a stunned Impact team… sorry, I didn’t actually mean to blow the play dead, fooled you. Was he intimidated by the home team? The crowd? Referees don’t talk on the record, so we won’t know.

With the mile-high altitude, Colorado is one of the toughest road dates in MLS. But, with the score tied 2-2, Rapids defender Tyrone Marshall got his second yellow after contesting a 50-50 ball with Felipe. Marshall was late, but the second yellow looked to be harsh.

With a stiff wind at its back, 30 minutes to play and the Rapids down to 10 men, the Impact must have felt good about its chances to actually squeeze three points, let alone one, out of Commerce City.

But it was that very wind at its back that did in the Impact — with a big assist to Kadlecik.

A free kick was swung in towards the far post, and Rapid Scott Palguta got his head to it. Impact keeper Greg Sutton, who came on for Donovan Ricketts in the second half, got his hand to the ball. It landed on top of the bar, and it was at this point where Kadlecik blew the play dead, and pointed for a Rapids’ corner kick. The ball, which had some backspin, bobbled on top of the bar, and the strong wind pushed it back off the bar and onto the field of play. Castrillon headed the ball home, and the Impact players were clearly stunned to see Kadlecik allow the goal.

The wind and the mistake put a damper on some very decent soccer put on display by the Impact, which chose not to do what most teams do when they go to Denver or Salt Lake City, bunker down and save energy. No, the Impact came out playing quick, attacking soccer.

And, native Montrealer Patrice Bernier enjoyed his best match in an Impact jersey. He gave the visitors a 1-0 lead by chipping the ball over keeper Matt Pickens after a fantastic back-heel through ball from Felipe unlocked the Rapids’ back four. Felipe back-heeled the ball into space, Bernier ran onto it and the Impact had its lead.

Then came the cliche: That you’re most vulnerable after you score. Just three minutes after Bernier had opened the scoring, Jeff Larentowicz stroked home a penalty to tie the game 1-1. The penalty came after Impact defender Hassoun Camara shoulder barged Rapid Wells Thompson in the box.

The question: Why would Camara make that challenge in the first place? The Impact had men back, and Thompson didn’t have an angle to get a shot on target. In that case, a defender holds his ground. But Camara risked making contact, and he paid for it.

Even though the Impact had more than half of the possession through the first half, it went to the dressing room 2-1 down, because it couldn’t defend a set piece against the club that leads MLS in goals off dead-ball situations.

With the strong wind at its back, the Impact controlled play early in the second half and got the equalizer it deserved. And it was Moor, the hero on the Rapids’ second goal, who played the role of the goat. Bernier made a perfectly weighted one-touch pass to striker Andrew Wenger, who was played onside by Moor — who didn’t hold the defensive line. Wenger finished and, soon after, the Impact was a man up.

But, for the Impact, being a man up is proving to be a curse.