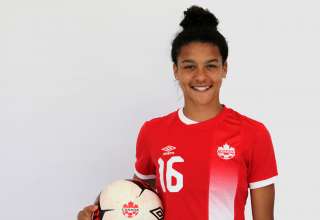 Canada resumed play in the CONCACAF Women’s  U-17 Championships on Wednesday, beating Costa Rica by a 2-1 score thanks to a brace from Andersen Williams.

The game was played in Florida (as the rest of the tournament will be). The tourney was originally scheduled to be played in Nicaragua; but, less than a week after it began, it was postponed due to civil unrest in the Central American nation.

Canada beat Bermuda 3-0 in Nicaragua before the tournament was postponed. The games played in Nicaragua count in the standings. The CONCACAF tournament acts as the region’s qualifier for the Women’s U17 World Cup.

Canada took the lead in the 18th minute thanks to route-one football. A long ball was punted into the penalty area, where Costa Rican keeper Fabiana Solano and two fellow defenders should have easily dealt with it. But, all three hesitated, and Jordyn Huitema was able to get the first touch. The ball then rebounded off of Solano and right to Williams, who was not going to miss an empty net.

Williams’s second goal of the day wasn’t as easy. Just five minutes into the second half, she went up the right wing with no help coming. Two defenders were in range, and a third was in the middle of the penalty area. So, she reared back and fired a shot that beat Solano and went inside of the far post.

With five minutes left, Costa Rica made it interesting. Priscilla Chinchilla dashed by Canadian defender Maya Antoine and flashed a shot across the goal that forced keeper Anna Karpenko to dive and get a hand to the ball. But the deflection fell right to Costa Rica’s Maria Paula Salas, who had an open net and finished her chance.

Huitema made a couple of good clearances in the 89th minute after a corner kick was scrambled into the Canadian penalty area.