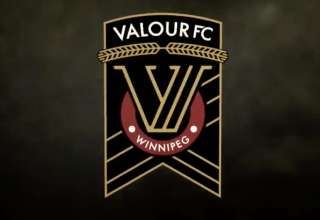 A then-unnamed Winnipeg club was one of the first two Canadian Premier League teams sanctioned by the Canadian Soccer Association.

On Wednesday, Valour FC became the fourth team to be officially unveiled ahead of the Canadian Premier League’s 2019 launch. It joins teams already announced for York, Halifax and Calgary.

“We want you playing for this team when you grow up, we want you to be hometown heroes,” said CanPL Commissioner David Clanachan to the supporters and youth players who came to Investors Group Field for the announcement.

The team is owned by the Winnipeg Football Club (the formal name for the Blue Bombers).

Wade Miller, the president of WFC, said that through the Women’s World Cup and friendlies hosted in the Manitoba capital, there is proof that pro soccer will succeed in Winnipeg.

“It is time for us to give young Canadian soccer players the opportunity to play professional soccer in Canada,” he said. “I look forward to seeing which Manitobans are on this pitch next year.”

Winnipeg Mayor Brian Bowman said the arrival of Valour FC is an “incredibly positive” moment for the city. He said the frenzy in the city over the Winnipeg Jets’ recent playoff run shows how hungry the city is to support pro sports.

The club’s name commemorates Winnipeg’s connection with the Canadian military. Valour Road in Winnipeg honours the memories of three men who lived on the street, who all volunteered for First World War service. All of them received the Victoria Cross from bravery. Only one survived the war.

The team will wear Valour Maroon, Wheat Gold and black.

Valour FC is the second announced CanPL team to have a military-themed name, joining Cavalry FC. Interestingly enough, Valour and Cavalry are the two teams (so far) to not include the name of their cities or regions in their names.

Naming teams for military regiments or military terms in general isn’t at all unusual. In hockey, both the Toronto Maple Leafs and Chicago Blackhawks can trace their names to military regiments who fought in the First World War. In soccer, Arsenal sports a cannon on the crest because the club was founded by workers at a munitions factory that supported British forces.

The launch of the Valour FC is only part of what is a whirlwind tour of the prairies by the CanPL brass. They will be in the Alberta capital Friday for the street party to celebrate the re-launch of FC Edmonton as a CanPL club.

Hamilton and “Port City” (Victoria) have also received sanctions from the Canadian Soccer Association, though details on those coming teams have yet to be announced.