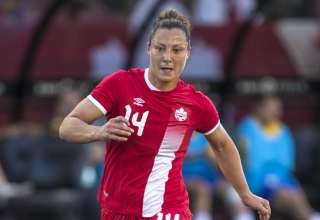 Three members of the Canadian women’s national team will hang up their cleats after February 4’s friendly against Mexico at BC Place.

“These women are leaders, role models and ambassadors for this game; they have driven this team to success in their own unique ways and we will miss them immensely,” said John Herdman, the coach of the women’s national team, in a release issued by Canada Soccer. “Their achievements on the pitch speak for themselves. They dedicated their life to this team and I’m just fortunate to have had the chance to work with them. This isn’t the end for these women. I genuinely believe it is just the beginning and I’m excited to see what else they are going to achieve in their lives”.

Tancredi won bronze medals with Canada at both the 2012 and 2016 Olympics. Of the two, we’ll remember her for her performance in 2012; she scored four times and excelled in the role of the true target forward. The Feb. 4 game will mark her 125th cap for Canada.

Wilkinson has made 180 appearances for Canada and, like Tancredi, is a two-time Olympic medalist. She’s also worked as a technical assistant for the Canadian U-20 program.

And Nault was with the Canadian team for the 2012 bronze medal, and was at the centre of the controversial handball call that led to the game tying penalty kick in the semifinal against the United States. With Canada up 3-2 in the second half, Eve-Nault was in the wall when Meghan Rapinoe’s indirect free kick struck her arm. Nault’s arm was against her body, it wasn’t a case of hand to ball, the shot was blasted right at her, but referee Christina Pedersen pointed to the spot, allowing the Americans to get the game-tying penalty kick. The Americans went on to win the semifinal 4-3 after extra time.