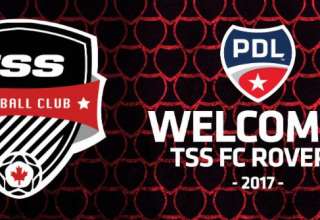 There’s something you won’t find on the roster of the PDL’s new Metro Vancouver-based franchise.

TSS FC Rovers will have no imports.

“We are solely Canadian,” says general manager Will Cromack. “We only have player spots for Canadians. We want to focus regionally as well, to focus on local players. That being said, if you’re Canadian and want to travel here and knock on our door, we’ll take a look.”

The Rovers were confirmed as participants in the PDL, North America’s premier U-23 developmental league, on Tuesday. It’s been a long process for Cromack and owner/head coach Colin Elmes, to buy the Washington Crossfire and then get the club ready to play in the 2017 season. The TSS Academy has been training players for nearly 20 years. They had originally hoped to have the deal announced before Christmas, but so much paperwork was involved in getting the team off the ground, including approvals from CONCACAF and FIFA.

The team will play out of Swangard Stadium.

“We want to stress that this team is for the fans,” said Cromack. “We are just the stewards of the club. Soccer in the lower divisions is a labour of love.”

Even though the Whitecaps already have a developmental program of their own – including a residency — Cromack doesn’t believe TSS is stepping on the toes of the MLS club.

“My outlook is the more teams, the merrier,” he says. “That means more pathways, more opportunities for players. If you get picked into the Residency, fantastic. But there are lots of players out there who deserve their shots.

“We hope to help develop a lot of players and them move them on to one of the 50 or so clubs that exist above us.”

“We are thrilled to welcome TSS FC Rovers into the PDL,” PDL Director Todd Eason said in a release issued by the league. “Targeting strong ownership groups, such as TSS FC Rovers, has been a strong focus of the league for 2017, and the club will definitely improve an already talented Northwest Division. By adding a PDL franchise to the top of their development pyramid, the TSS FC Rovers have provided a direct path to the professional level for their elite academy players and local college-aged talent.”

Calgary Foothills, with a strong emphasis on Alberta-based players, got to the PDL final in 2016.