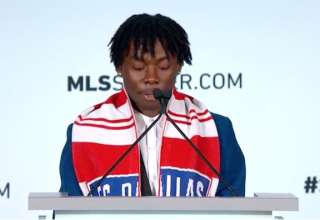 But, despite Reid being a standout scorer in League1 Ontario and Shome being the only player in the draft class with significant professional experience — with 26 NASL games played —  they both fell to the late stages of the second round of Friday’s SuperDraft.

Reid went 18th in the second round to FC Dallas (40th overall) and Shome went to the Montreal Impact with the 19th second-round pick (41st overall). Of course, with the  Ottawa Fury moving from NASL to USL and beginning an affiliation with the Montreal Impact, this could be the scenario: Shome is sent to Ottawa and could face FC Edmonton in the Amway Canadian Championship. The Eddies’ former NASL Canadian rival, the Fury, might be able to line up Shome against his hometown team.

“On Shamit’s side, he is a player who already has a certain amount of experience in second division and he has a lot of technical quality in midfield and should integrate well in our system,” said Impact technical director Adam Braz.

Kwame Awuah was selected 16th overall by NYCFC; the University of Connecticut midfielder scored twice and added seven assists in NCAA play in his senior year.

“It means even more to me that they paid to move up the order – it means they really believed in me and really wanted me – to be part of a staff which welcomes me to the family, it’s a big thing, Awuah was quoted on the NYCFC website. “I can’t wait to prove that I’m worth the whole shake-up.”

And, Brian Wright, who is second all-time on the University of Vermont scoring list, was selected 20th overall by the New England Revolution.

Toronto FC had two opportunities to take Canadian players — in fact, any player — after it selected the Notre Dame’s Brandon Aubrey in the first round. Would the Reds take a flyer on any of these Canadians, with those two second-round picks? No, the Reds traded both picks away and, when he was interviewed on the MLS feed of the draft, TFC coach Greg Vanney said “we’re done for today” as if he was already an hour late to get to the airport. It was like the last place he wanted to be was the SuperDraft floor.

The Whitecaps selected two defenders — UConn’s Jakob Nerwinski and St. Francis University’s Francis de Vries, which is a sentence that’s a lot easier to write than it is to say. Nerwinski was part of the U-23 U.S. national team identification camp, and de Vries played with the Michigan Bucks team which beat Calgary Foothills in the 2016 PDL final.

Montreal took University of California-Santa Barbara striker Nick DePuy in the first round. He scored 31 times in four seasons for UCSB.

But, what does it say when MLS asks the Canadian Soccer Association to recommend what it thinks are the two top youth prospects in the country, and these picks fall to late in the second round? Both move into the realm of being longshots, but we can only hope that it will fuel these young men to prove these critics wrong. One of the MLS analysts on the league’s feed even suggested that Shome had a “funny gait” that scared off some teams. Hopefully, Shome gets a copy of that and plays it over and over and over.