May 16, 2022
9 New Articles
Home NASL & USL FC Edmonton Why we in Edmonton should see Minnesota’s move to MLS as bittersweet 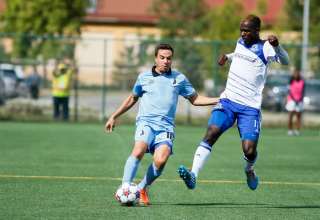 Eddies in action against Minnesota.

Being in Edmonton on the day that the Twin Cities officially gets the nod as the next MLS franchise is well, kinda bittersweet.

Let’s face it; the Eddies used to have a decent rivalry with Atlanta a couple of years back because the teams didn’t necessarily like each other very much. But, really, it’s hard to pinpoint who is supposed to be FCE’s rivalry team. Ottawa? No. Except when we play each other, we all kinda cheer for Ottawa because the club is committed to giving Canadians minutes on the field.

But, with the Flyover Cup — a supporter-driven initiative which sees the winner of the FCE/Loons season series get the award — it should be Minnesota who is our closest rival. But, in a weird way, the Loons are kind of like the Eddies’ best frenemy. We’re the cold-weather cities in a league filled with tropical teams; we’re united in our sense of isolation from the rest of the NASL.

And our matches against each other, well, they’ve been excellent. The interaction between supporters has been great. It won’t be forgotten that the Dark Clouds, the main support group for the Loons, raised money when they found out about the fire that devastated the town of Slave Lake, north of Edmonton, back in 2011.

I have a lot of respect for the organization; whenever they’ve come into Edmonton the team has been great to deal with. Coach Manny Lagos has always been open with our broadcast team.

So, it’s kinda like seeing a best friend get married; you are happy for the guy, but you know your relationship will change.

Minnesota United will move to MLS in 2018; and while there will no doubt be those die-hard factions of NASL supporters who will see the team’s move as some kind of betrayal, the fact is this: The Loons’ acceptance into MLS is very, very good for NASL.

First, here’s the statement from NASL:
“The North American Soccer League was created to provide fans, players, and partners with a professional structure that best aligns with the international game and a model that integrates into the global soccer economy. While Major League Soccer will make an announcement on Wednesday concerning Minnesota United FC possibly becoming an MLS expansion franchise, the NASL will continue on its path to build a league that is in line with the rest of the world and offers North American soccer fans a highly competitive alternative.

“Our soccer landscape has been evolving at an unprecedented pace since the relaunch of the NASL in 2011. As the sport continues to grow, we anticipate making further announcements during the year concerning our own expansion and new partners. The developments in Minneapolis only serve to affirm once again, that the NASL is building high-caliber clubs, both on and off the field, and playing a leadership role in the evolution of professional soccer in North America. The announcement will not affect how we approach our plans for the future. We are as committed as ever to continuing the growth in our existing markets and expanding into new markets where we see great opportunities for our players and fans – the groups our league is built around.

“As we get closer to kicking off our fifth season on April 4, we look forward to another great year on and off the field.”

NASL wants to expand. And there’s no better carrot to dangle to any prospective owner than the hope of moving up. The fact is, MLS and NASL are businesses. No matter what the soccer-war types may say, right now MLS is Div. 1 in Canada and the U.S., and NASL is Div. 2. So, NASL can tell an investor that if he or she comes into the league, and have success, that yes, the chance is there to move on to a bigger arena. NASL loves to advertise the fact that it has no cap and has free agency; it can also brag that it gives its owners the freedom of mobility.

Look, when MLS struck its deal to make USL its official affiliate, the fear was that USL would pick off all the expansion markets, because investors would think that you would now have to go the Orlando City route to get to MLS. USL would be more attractive because NASL would be isolated.

But that hasn’t been the case. NASL teams are still very much in the mix for MLS expansion. Minnesota was selected. San Antonio was considered. So, it’s clear that MLS does what all good businesses do; the league’s brass put emotion aside and made deals that are best for it going forward.

While MLS has a long and rather complicated history of making promises to Canadians, we can put a little bit of faith into the fact that Commissioner Don Garber recently said that he feels there are more markets in the U.S. “and Canada” to which the league can expand. (Of course, the league would need to decide to go to more than 24 teams.) But, if the Canadian Soccer Association’s hopes to form our own “Division 1A” don’t materialize, the next best hope for Canadian soccer development is to become a stronger partner in MLS, with revamped roster rules that open up opportunities for Canadian players and more Canadian clubs. If that happens, those Canadian clubs would likely need to come from NASL.

So, to the soccer supporters in Minnesota, congratulations. We’re really sorta kinda maybe happy for you. We’ll raise a glass for you now, and then cry in our beer when you’re looking away.