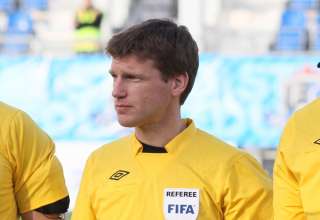 Major League Soccer is regularly criticized over its lack of transparency; allocation money, draws held to assign players to teams, we’re not even 100 per cent sure of the roster rules governing the 2015 season because, well, they haven’t been posted by the league as of yet.

So, when the league does make itself more transparent, it deserves to be pointed out — and lauded.

Case in point; on Wednesday morning, the league announced that it an independent panel had rejected Toronto FC’s appeal of fullback Justin Morrow’s red card. Two weekends ago, Edmonton-based referee Dave Gantar ruled that Morrow’s slide tackle had denied Columbus forward Ethan Finlay of a goal-scoring opportunity and sent off the defender. The replays looked to indicate that Morrow in fact got the ball on the challenge.

The incident was sent to the review panel, made up of three officials — one from the Canadian Soccer Association, one from the U.S. Soccer Federation and one from the Professional Referees Organization (PRO), the body that administers officiating assignments in MLS.

To win an appeal, it’s not good enough to get two out of three votes. The board has to be unanimous.

And, in stating why the appeal was rejected, MLS was clear that the lack of unanimity was the issue. The league stated the panel members “were not unanimous that the referee had made a serious and obvious error in the send-off.”

So what we know from this is that the opinions on the panel were mixed. Some thought that Morrow should be taken off the hook, and others didn’t. It gives fans some needed insight into the obstacles a team or player must overcome in order to overturn a referee’s decision.

And, the statement offers another interesting insight; to overturn, the board members must all feel there was a “serious and obvious error.” Any call that may be deemed close — well, it’s not “obvious,” is it? And that’s the thing: On first view, without the help of replay and in real-time speed, Morrow could be interpreted to have fouled Finlay. It’s when we look at the replay that we say “huh, maybe not.” So, to at least one member of the panel, it was not an obvious mistake.

You can take issue with the panel’s decision. But, in this case, MLS deserves praise for letting fans in on the process. So, the next time your favourite team appeals a referee’s decision, you’ll understand the criteria that needs to be met in order for the card to be rescinded.