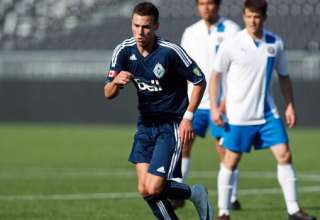 The Vancouver Whitecaps have loaned prospects Ben Fisk and Emmanuel Adjetey to the Charleston Battery of the USL.

While the Whitecaps have not announced an affiliation with a USL club as part of MLS’s new agreement with America’s third-division, the move will no doubt be seen as a furthering of the partnership between the two leagues.

Fisk is one of the Whitecaps most-talked about prospects and scored 14 times in 32 matches for the United States Soccer Development Academy side last season.

Both players will spent the 2013 season in South Carolina.

“Ben has been one of the top young players we have had come through our Residency program and Emmanuel is a raw talent who we are interested in seeing further development,” said Whitecaps coach Martin Rennie in a release issued by the club. “Playing minutes is vital for both of these young players. They are in a great environment with the Charleston Battery organization, so we’re really excited to see how they progress.”

The team has already loaned out Trinidad and Tobago Carlyle Mitchell to FC Edmonton of the NASL, and the Eddies confirmed in late March that discussions were held over another potential Whitecaps player moving to the Alberta capital, but that move didn’t come to pass.