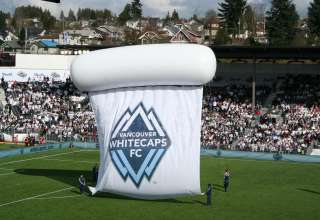 In 2007, it took Toronto FC 23 minutes and 13 seconds its fifth MLS game before it could register a goal. It took the Vancouver Whitecaps only 15.

Designated Player Eric Hassli got the party started at a sold-out Empire Field (22,592), slamming home a half volley — endearing himself as a new folk hero on the Vancouver sports scene, as the Whitecaps stormed past an overwhelmed Toronto FC 4-2 in the all-Canadian curtain-raiser for both clubs.

“Slow start,” joked Hassli — who added another goal later in the game — through a translator.

And it was a party. The intimate surroundings of the old barn — which the Whitecaps will call home until September — made for a cozy, raucous atmosphere. And it was fueled by a game that made for gripping entertainment. It’s hard to think of any game at BMO Field over four seasons that offered this much for the fans.

“We couldn’t have asked for a better start than this,” said Whitecaps’ coach Teitur Thordarson.

“It (the crowd) was electric. I cannot have imagined it would be like this.”

“They supporters helped us in this game,” said Hassli. “They helped us get out of the most difficult parts of the match.”

Make no mistake. The scoreline actually flattered Toronto FC, as the Reds’ back four was overwhelmed by the invention and movement of Thordarson’s charges. Adrian Cann, moved from the middle to left back was absolutely overrun by the Whitecaps’ Swisss midfielder, Davide Chiumiento, in the first half.

Chiumiento ran into space, made shifty runs and confused Cann at every turn. The only reprieve? That he tweaked a hamstring and needed to come out at halftime. He will be evaluated later this week.

But, make no mistake. This wasn’t about Hassli and Chiumiento. The Whitecaps were better than Toronto anywhere and everywhere on the pitch. Either the Whitecaps have sent a message to the rest of the league that this club is no mere expansion club, or Toronto FC is far more awful than the pundits had feared.

TFC actually had the first decent chance of the match, as a nervy Alain Rochat gave the ball away in front of goal. TFC forward Nick Soolsma pounced on it, but scuffed a shot that rolled easily into the hands of Vancouver keeper Jay Nolly, making his first MLS appearance since 2007.

But, then, the Whitecaps came at the Reds in waves. Chiumiento barging down the right, and 18-year-old Russell Teibert looking dangerous down the left.

Chiumiento was the architect of the first goal. His bulldog run down the right side saw him find an open spot in the corner, where he turned and lofted a high cross into the area. TFC central defenders Nana Attakora and Ty Harden couldn’t deal with it; Vancouver striker Atiba Harris dove at the ball, but ended up deflecting the ball to Hassli, who slammed it home on the volley, creating a five-minute delay as the ponchos handed out to fans for the “Whiteout” promotion rained down on the field.

“It’s very special,” said Hassli. “The first victory for Whitecaps in MLS. It’s a group. It’s 30 players — and all of the staff around the team.”

TFC, though, struck back in the 20th minute. Whitecaps defender Michael Boxall lost his concentration and his mark — Dwayne De Rosario — as Maicon Santos turned and rolled a pass behind the back line. De Rosario blew by Boxall, and ran alone on the Vancouver goal, beating Nolly. It marked the 8,000th goal scored in MLS history.

But, instead of being deflated by the mistake, the Whitecaps grew in stature. Boxall had a great chance to make amends, but his open header off a Teibert free kick was sent straight at TFC keeper Stefan Frei.

Before half, the Whitecaps got the lead back. Chiumiento made a delicate pass from the top of the box, springing free Terry Dunfield, who smashed the ball into the bottom corner.

Halftime brought no reprieve for TFC, even though Chiumiento had to come off. Hassli put the ball in the back of the net, but was called for throwing Attakora to the ground. But that’s the thing about Hassli; he barged into the box, not caring about knocking over defenders. From one game, it’s easy to make a comparison to Colorado’s Conor Casey — a mix of skill, power and determination.

Atiba Harris also had two great chances to extend the lead; he buried the second attempt. First off, he pounced on an awful pass out of the back from Harden and streaked in alone on Frei. Attakora caught him from behind, but no penalty was given.

But, in the 63rd minute, Harris got it done. Teibert sent high corner kick into the area. TFC striker Maicon Santos tried in vain to push the big body of Harris away from the ball, not seeing that it was right there underneath them. Harris got his foot to it.

Whitecaps substitute Wes Knight then sprung the offside trap, and led a three-on-none break on Frei’s goal. He slotted a pass across for Hassli to slam into the open net.

Maicon Santos got one back to make it 4-2 but, if anything, it made a game that wasn’t very close on the pitch look decent on the scoreboard.

De Rosario, while honoured to have scored the 8,000th goal in MLS history, was displeased by the effort showed by the Reds.

“I’m disappointed, extremely disappointed,” said De Rosario. “Not only to lose, but the way we lost. No fight… They (the Whitecaps) were a team that had more heart, more desire, more hunger.”

And he issued a warning for anyone who thinks that the Whitecaps might be an expansion pushover.

Cann said TFC must learn from its many mistakes.