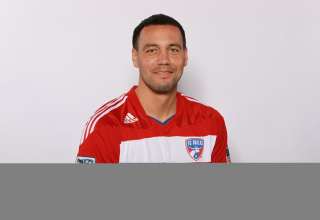 Both Canadian teams had what was, for them, meaningless games on Saturday. Both Toronto FC and the Vancouver Whitecaps are simply playing out the final two weeks of the MLS regular season.

For the record, TFC drew Philadelphia 1-1 at PPL Park a game only notable for the fact that, with the point, the Union clinched a playoff spot in just its second season of existence. The Whitecaps had its modest two-game winning streak snapped, as Vancouver defender Jay DeMerit was involved in, ahem, both FC Dallas goals in a 2-0 loss.

In fact, there was far more interest in the lineups that TFC put out against Philly (and that FC Dallas trotted out against Vancouver) than in the matches themselves.

Dallas coach Schellas Hyndman, whose team has wrapped up a playoff spot but not a decent seed, started a full-strength lineup against Vancouver. From veteran midfielder Daniel Hernandez to breakout forward Brek Shea to Winnipeg-bred defener Ugo Ihemelu, the FCD regulars were on the pitch. So Hyndman is gambling that, by being at home on both Saturday and for the midweek CCL match, that his troops will stay fresh enough to take on both games.

Or would he sit a regular or two when Toronto FC faces FCD Tuesday in their CONCACAF Champions League group-stage finale, knowing that it needs to steal three points from Pizza Hut Park in order to advance to the quarters?

TFC left midfielders Terry Dunfield and Julian de Guzman off the Philly trip. Striker Danny Koevermans didn’t play. But Designated Player Torsten Frings played on the backline, as did forward Ryan Johnson. Joao Plata, missing for three weeks, made his return to the lineup — but if the Ecuadorean is in coach Aron Winter’s plans for Tuesday, he needed playing time to shake off the rust.

Frings played just over 53 minutes of time, replaced by Nathan Sturgis, a player so low down the depth chart, that you wouldn’t be blamed for forgetting he even played for the Reds anymore. Well, he did cost the team a first-round draft pick — so you might remember, after all.

Plata gave way soon after Frings, with enough time under his belt to be ready for Dallas.

Kyle Davies, the American youngster who was acquired in a deadline-day deal with the Los Angeles Galaxy, got a second-half run out.

Philly’s goal came as the result of two grave TFC errors; goalkeeper Milos Kocic misplayed a pass out towards the right sideline. Instead of allowing the ball to roll out and allowing the Union to have a throw-in, defender Ty Harden made a diving attempt to keep the ball in. The problem? He succeeded. He put the ball back towards the middle of the park, to the feet of the Union’s Justin Mapp. He played it to reigning Player of the Month Sebastien Le Toux, who smashed a shot into the corner of the net.

TFC drew level when Johnson was able to beat the Union’s defenders to a low cross from Nick Soolsma. For TFC fans, seeing Johnson getting a morale boost from scoring the equalizing goal could be a good thing ahead of the FCD match.

In Dallas, Marvin Chavez scored in the first and Brek Shea scored in the second to ensure that the Whitecaps would have a winless road campaign in their inaugural MLS season. But maybe the most remarkable moment in the game came right before the final whistle, when midfielder Hernandez went off the pitch favouring his right knee. He fell awkwardly. If he can’t go against TFC in the CCL match, well, that’s huge.

Chavez’s goal came after he was able to waltz around an attempted slide tackle by DeMerit and then slam a shot past Whitecaps’ keeper Joe Cannon.

Shea sealed the points with an awesome left footed volley in the area; but it was set up by a poor headed clearance by DeMerit. Instead of getting the ball away from danger, he nodded the ball to Shea.

But, while the win puts FCD in a tie with Real Salt Lake for third in the west, we will have to see what the cost of the three points was to Hyndman and co. We will know that answer after 90 minutes of action against Toronto FC are complete.