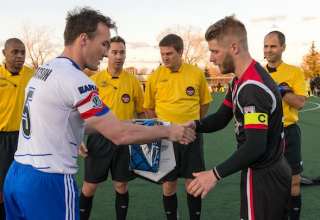 After all, if Wednesday’s second leg of the Amway Canadian Championship preliminary round between the host Eddies and the Ottawa Fury finishes 0-0 after extra time, penalties would decide the tie.

(Special disclaimer aimed at Fury coach Marc Dos Santos: There may be tack-to-dressing-room-wall material to come.)

While the Eddies have scored just once all season, in the season opener in Tampa, coach Colin Miller feels that plenty of chances were created outside of a 1-0 loss at home to the Cosmos a couple of weeks back. And he thinks that when the first goal comes, more will follow.

“I feel we’re about to give someone a hammering,” he said.

And Miller said that, while Ottawa looked good on the weekend, “it wasn’t Carolina at their best.”

But, knowing that a scoring draw puts Ottawa through, Miller said the Eddies have to think about winning the game outright, and not try to nurse a 0-0 scoreline.

“Guns ablazing,” said Miller. “We have to win at all costs. Our mindset is that we have to score goals tomorrow. No disrespect, but I believe we are a better squad than Ottawa.”

Miller said that he felt the Eddies should have won the first leg going away.

“In the game in Ottawa, we should have scored two or three. Ottawa created next to nothing, in all honesty.”

FCE captain Albert Watson agreed that the Eddies are ready for an outburst.

As the pillar of FCE’s stingy defence, though, Watson knows that giving up a road goal to the Fury would be an issue. But he said that the Eddies can’t sit back and pass up chances to go forward just for the sake of milking a 0-0 scoreline.

“To be fair, I am disappointed that we’ve only kept one clean sheet out of our four games this year, and that wasn’t in the league,” said Watson. “Each of the other games we’ve given up one goal. But , it’s easier to defend when you have something to hold on to.”

Watson said the defenders need to do more to support the attacks; getting forward more and playing better balls ahead. And that’s true even if 17-year-old Marko Aleksic is pressed into service due to injuries. Kareem Moses and Mallan Roberts are carrying hamstring problems, and that has left the Eddies thin in the centre of the defence.

As well, midfielder Milton Blanco, who broke his hand in the home opener against the New York Cosmos, is out indefinitely.

As for the penalties? Miller said he won’t make a list of five players to take the kicks in case they’re needed on Wednesday.