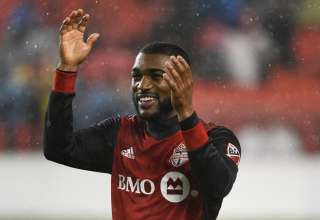 They’re at BMO field, in the lousy, blustery rainy weather. Before the game, at some point, you’d think manager Miguel Herrera and his staff would have looked at some video of Toronto FC in action, and thought to themselves, “wow, Jozy Altidore and Sebastian Giovinco can really burn you on the counter.”

But, no, Club America came in playing a line that hasn’t been that high since, well, cocaine. And, in critical positions, Club America’s defenders were wildly over-aggressive, putting in high-risk, low-reward tackle attempts that put them at a numerical disadvantages in their own half.

It was a cocky approach that basically announced to the world that Club America didn’t really respect Toronto FC. Basically, the Mexican powerhouse treated what has to be regarded as the best side in MLS history as a 2002-grade also-ran.

It was a wild night of adventure, and Toronto FC will hold a solid 3-1 advantage going into the second leg at Azteca Stadium

The over-aggressive-on-the-road Club America got burned early on, when Giovinco burst in one-on-one against central defender Edson Alvarez. Alvarez lunged and got quite a bit of the ball, but the penalty was given against him, anyway. It’s the grand rule of CONCACAF, never go to ground to make a challenge in your own penalty area. Ever. More often than not, the penalty is given — and Alvarez should know that (even though, traditionally, Mexican sides are the beneficiaries of those kind of calls).

Giovinco went up the middle with the penalty, making it 1-0.

A few minutes later, Giovinco, though, was somewhat fortunate to get only a yellow after he lashed out with his boot to strike a prone Club America player.

But, the incident seemed to fire up the visitors, and after dancing through Drew Moor and Michael Bradley, Club America’s Andres Ibarguen equalized with a rocket that gave TFC keeper Alex Bono no chance at all.

But, the high line and over aggressive defending allowed TFC to take the lead before half time. Again, it was Alvarez at the centre of the action, as he decided to go well out of position to try and make a rash challenge in midfield. His strange foray left his already-playing-way-too-high back line very short, and Giovinco was able to find Altidore. The big TFC striker made no mistake, taking advantage of a one-v-one situation that, had Alvarez scrambled back into position rather than go for a wander, should have helped cover.

Canadian Ashtone Morgan made it 3-1 in the second half after he jumped from the fullback spot into the penalty area to slot home a pass from Auro. Club America left itself short in the box after two, count ‘em, two players, left home in vain attempts to try and tackle Auro. The three left in the back couldn’t handle attacking runs from both Morgan and Altidore.

As a defender, you sometimes have to decide that caution is better than aggression, and you’r better off staying on your feet and taking away passing and crossing chances rather than charging from the middle out to the wing like a chicken with your head cut off. But a serious lack of discipline and positional awareness burned Club America again.

Take nothing away from TFC; the Reds read the plays and saw the holes in Club America’s game.

Of course, Club America apologists will point to the fact that Bono made a very good save on striker Henry Martin late in the game. Had Club America got the second road goal, the second leg would be shaping up much differently.