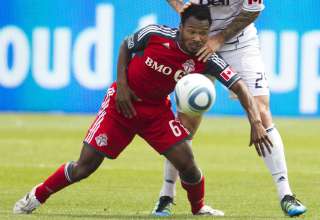 One of the keys to success is to learn from your own mistakes but, once again, Toronto FC let history repeat itself. The Reds had another poor start to a game this season and found themselves picking up the pieces against D.C. United on Saturday night.

For fans and media, the word “rebuild” is nothing new. Past coaches have used that term as well to describe the team’s lack of results on the pitch. From Mo Johnston to Aron Winter, coaches along with management have preached patience and that it will take time to put together a winning team. Over the years, management has made many changes to the roster in an attempt to put their stamp on the team.

“We need time,” said Winter after the loss on Saturday night. “I can’t say a month, two months or three months, we need time. It could also be one year because we’re rebuilding. Each position we need some players. We got another player, defender (Richard Eckersley) and slowly on we’re going to get a team we want and the soccer we want to play.”

Winter’s words are eerily reminiscent of what other coaches have said in the past, most recently Preki, who was making similar comments after a slow start to last season. But for now, Winter is the man in charge to lead the franchise to the playoffs and he has three years to do so. The question is will TFC fans be patient and let the rebuild take its course or will they abandon their support, leading MLSE to clean house once again? Only time will truly tell.

In the meantime, the team can only look forward to its next match on Saturday, as it hosts the Columbus Crew at 4p.m. ET, a club the Reds have yet to defeat in MLS play. The Reds will once again attempt to address the main cause for concern so far this season –starting matches poorly on the defensive end.

Teams of the past four seasons have been plagued by many shortcomings but it was the team’s knack for giving goals in the last 5-10 minutes of a match that became its pitiful trademark. This season the futility has switched to the opening minutes of a game. Three of the six games in the 2011 campaign, Toronto has given up an early goal or in the case of last game, two early goals. Against Los Angeles, it nearly gave up goals early but was bailed out by keeper Stefan Frei and the crossbar. It is a disturbing trend that sees the team fighting an uphill battle almost every game.

“A few seasons ago it was last five to 10 minutes we were giving up goals and now right when the game starts,” said defender Nana Attakora. “First 10 to 15 minutes, that’s not acceptable. We should start off fired up. Even if you need to kick it out, do what you need to do to not give up a goal. I feel like we’re killing ourselves right now starting off slowly. Even against L.A. we got lucky. All the coaches pointed it out. It’s something we need to fix.”

The coaches and player all recognize the problem and has been in fact addressed it before recent matches.

“The worst part about is the coaches told us before the game, our warmup was poor. They saw it,” said Attakora.

“I have no idea why, we have everything here setup for us. We come in at the right times, we have the coaches getting us focused before the game. And they address it, they tell us every game don’t start off slow and we seem to always start off slow. That’s something we need to fix moving forward.”

Midfielder Julian de Guzman has seen progress in practices but seems at a loss for words as why it hasn’t translated well into game situations.

“It has a lot to do with the mental aspect,” said de Guzman. “Throughout the week I see ourselves doing well in the practices but to be honest, I’ve seen a lot of good progress being made from the start of the season before the D.C .game.”

“We now have a week ahead of us to react to this disappointing result and to look forward, the only way to go is up,” added de Guzman.
“I think we have enough time to go over today’s result.”

Jacob Peterson, who started in the right back position the previous game, was the victim on the first goal. He thinks everyone should be held accountable and the issue needs to be addressed immediately.

“I don’t think anybody can look at themselves in the mirror and say I played well. So back to the drawing board here I guess,” said Jacob Peterson.”

“I think it’s a mentality, each player, myself included. We’ve got to do something, whether that’s to change up your pre-game ritual. We’re not ready to play obviously. I think three or four games this year. I think it comes down to wanting to win, have that passion to play, what (assistant) Bob (de Klerk) and Aron (Winter) preach and it was missing.”

De Guzman thinks the team needs to break the game down into blocks and attempt to shutdown their opposition first before developing an offensive attack.

“If we could start the game with shutout in the first 20 minutes and slowly pick up rhythm, we could keep possession and we would get our chances,” said de Guzman. “We have a lack of passion and that was the key aspect. It’s a shame to leave the fans disappointed like that, entire city and organization. We will definitely be doing something in the game against Columbus.”