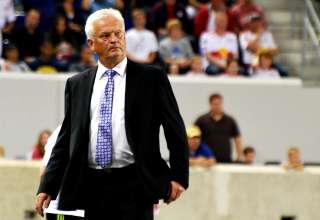 A week after Toronto FC routed Dallas 3-0 at Pizza Hut Park, FCD hosts the Red Bulls in the opening game of the MLS playoffs. The one-and-done wild-card match-up kicks off Wednesday at 9 p.m. ET on TSN2.

Backe said he has looked long and hard at the videos of FCD’s last five matches — including the loss to Toronto. And he couldn’t help but be impressed by the way the Reds dismantled Dallas.

“They — Toronto — were phenomenal in that game,” said Backe in a pre-playoff conference call.

What can New York learn from TFC head coach Aron Winter’s approach; that the best way to stop the speedy Dallas forward trio of Brek Shea, Jackson and Marvin Chavez is to make sure they don’t get the ball.

“You have to stop the distribution to those three guys, and Toronto did that very well.”

Striker Luke Rodgers will miss the game due to injury, so Backe will use either Dane Richards or Juan Agudelo in attack with Thierry Henry.

The match features two teams MLS fans would never have figured would have slumped down to Wild Card status. At the start of the year — and a quick succession of wins to begin the season — the Red Bulls were everybody’s pick to win the East. But, through what Backe called “three months of almost suffering,” the Red Bulls moved to the back of the playoff pack — and only made the postseason thanks to a series of clutch wins over Portland and Philadelphia over the last couple of weeks, while D.C. United imploded, losing games to a series of non-playoff sides.

Meanwhile, Dallas was near the top of the MLS standings until September, when the team went into a nosedive, which included the loss to TFC last week. FCD is reeling.

Backe said New York’s improved form over the last couple of weeks is cause for optimism, but admitted his team still isn’t near the form it showed in April.

“We haven’t been that dominating controller of games that we have been in the beginning of the season.”

And, surprisingly, the Red Bulls haven’t practiced penalties at all this week — even though the match could be decided in spot kicks. Backe said he has picked four of the shooters already, but he and the team didn’t see the point of going to the spot in the training ground.

“We decided not to practice penalties; it’s such a different environment, doing it on the training pitch.”