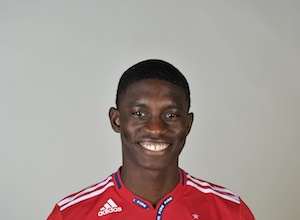 The Chicago Fire isn’t heading to the MLS playoffs, but the team did provide the league with its final Player of the Week for the 2011 regular season. Rookie defender Jalil Anibaba got the nod after the votes from the membership of the North American Soccer Reporters was counted. \

Anibaba scored twice in Chicago’s season-ending 3-2 win over the Columbus Crew. And while the Fire’s players are cleaning out their lockers, Anibaba did have a major impact on the playoff race. With the loss, Columbus fell in the Eastern Conference standings and will have to play in the Wild Card playoffs — a road date in Colorado. And, beating the defending MLS Cup champs in the mile-high Rocky Mountain altitude is a terrible ask.

How The 11 voted: Anibaba got the nod over Toronto FC’s Danny Koevermans, who had an assist and a goal in the final game of the Reds’ season. But Anibaba’s performance had an influence on the playoffs, while Koevermans’s performance came in a game between Toronto FC and the New England Revolution, two teams that had nothing to play for save pride.

Koevermans has eight goals in 10 MLS games — a stunning start from the target man. Unfortunately, his name isn’t on the season-end MLS award ballot when it comes to newcomer of the year — which goes to first-year players who are not rookies. Joao Plata and Torsten Frings are TFC’s players on the list.