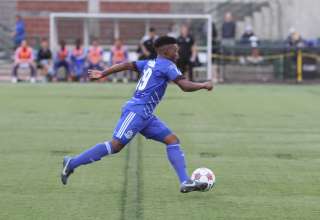 Let’s face it. When it comes to men’s soccer in Canada, there aren’t too many “were you there when?” moments.

But, on Wednesday, the fans at Clarke Stadium and those who were able to watch over the Internet were treated to one of those rare performances that give Canadian soccer supporters a reason to believe that there is a light at the end of the tunnel.

Hanson Boakai, who graduates from high school on Thursday, put in one of the most dominating individual performances in the history of the Voyageurs’ Cup. FC Edmonton eliminated the Ottawa Fury with a 3-1 win, and will face the Montreal Impact next Wednesday at Clarke Stadium in the first leg of their Amway Canadian Championship semifinal.

The night though, belonged to Boakai, who set up both of Daryl Fordyce’s goals and also bagged one himself. Yes, many Canadian fans are familiar with his exploits with the U-17 national side. But, at the pro level, this was a night where he exploded onto the scene. He took on two or three Ottawa players at a time, and dribbled through them. You could feel the electricity in the stadium when the ball was at his feet, as the crowd anticipated yet more moments of magic.

“Hanson is a breath of fresh air for Canadian football,” said FCE coach Colin Miller. “For me, it’s not a surprise. What he did today we see on a daily basis. He does it in training against our players.”

But Boakai wasn’t the only 17-year-old on the pitch for the Eddies. Remarkably, Miller started two 17-year-olds, with Marko Aleksic, who also graduates high school on Thursday, coming in at centre back.

The ironic part of all this, is that Miller didn’t feel this was anything close top FCE’s best game of the season. Even though this was the Eddies’ first win in any competition so far this season, he felt that the Fury outplayed his side for many portions of the first half. But Boakai was the wild card, like a waterbug skipping on a pond, moving in one direction and the next — and Ottawa could find no way to mark him.

“To be honest, we’ve played better this season and lost,” said Miller.

And, even though the Eddies were up 1-0 at halftime, they were blasted by their coach.

“I got warmed up at halftime, I can’t repeat what I said to my players, but I gave them a blast. I worked up a sweat. But they responded very well in the second half.”

“To be fair, we deserved to be down at the half,” admitted Fordyce.

Going into the second leg at 0-0, the Fury players knew that giving up a goal wasn’t a big deal. Whether it was 0-0 or 1-0 to the Eddies, the mission remained the same — to get a road goal. Any scoring draw was as good as a win. So, the Fury players pressed in numbers, playing a very high line and daring the Eddies to try to play the ball through them. The Eddies kept turning the ball over to the high pressure, and the Fury created several good chances, with Tony Donatelli skirting a shot just on the wrong side of the post in the fifth minute. Sinisa Ubiparipovic sent a free kick off the bar in the 27th.

But, then, in the 30th, the game changed. A long ball was played over the Fury midfield. Defender Omar Jarun had position on FCE striker Frank Jonke, but the attacker was able to get his head to the ball first. He settled the ball, then passed it to a rushing Boakai on the wing. Boakai then dashed around Fury defender Drew Beckie, and slotted a perfect pass that Fordyce met at the near post.

At halftime, Dos Santos called for his team to be calm, but the Fury came out and didn’t have the swagger of the first half. Just a couple of minutes into the second half, midfielder Richie Ryan played an awful ball back to Jarun. The Ottawa defender lunged at it, but couldn’t stop Boakai from getting to it. Boakai’s first shot was palmed away by keeper Devala Gorrick, but Boakai got the rebound, turned and fired it into the goal.

Boakai then laid off a pass to Fordyce for goal number three, and then set Jonke free in the box with an inch-perfect pass — but Gorrick stopped that chance.

Vini Dantas got a late consolation for the Fury, but the damage inflicted by Boakai was too great to overcome.

“At halftime, the coach told us to step it up. We stepped it up and they couldn’t handle it,” said Boakai.

Now, FCE will play Fort Lauderdale at Clarke on Saturday, then host the Impact Wednesday, which begins a cycle of five games in three weeks.

Miller said that 17-year-olds don’t recover as quickly as the senior players, so he’ll have to wait and see what kind of minutes Aleksic and Boakai get on Saturday. But he knows the fans will be calling for a Boakai start.

“It’s a not a matter of pacing ourselves. It’s onto the next game. We are professional players, we can cope with it. When I played in Ireland we played Saturday-Tuesday-Saturday-Tuesday.”