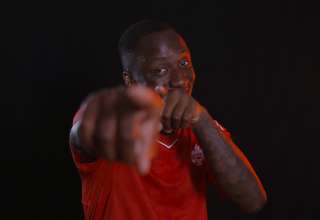 When it comes to the Canadian men’s national team and the “will he or won’t he?”story, we’ve all grown pretty accustomed to the “won’t he” ending.

But that looks not to be the case with Ballou Tabla, the Canadian-Ivorian dual citizen who moved from the Montreal Impact to Barcelona.

On Tuesday, Canada Soccer posted a video of Tabla in a Canada jersey. In it the player says, “see this jersey? Can’t wait to fight for it again.”

And, considering Tabla’s picture is now being used to promote Canada’s Oct. 16 CONCACAF Nations League home match against Dominica, we can assume he’s going to be on the roster for the game at BMO Field.

The thought of Tabla linking up with winger Alphonso Davies and striker Jonathan Davis… well, Canada hasn’t had this many young talents playing in the national-team fold since, since, well, as Eddie Izzard would say “people weren’t alive, then.”

Tabla was Canada’s U-20 player of the year in 2016, but refused then-U-20 coach Rob Gale’s invitation to join the Canadian side — and the team, already overwhelmed by injuries to key players, failed to qualify for the U-20 World Cup. Tabla’s refusal began the will-he-or-won’t-he debate; would he choose Cote D’Ivoire or Canada?

In a recent press availability, national team coach John Herdman had even allowed that choosing Cote D’Ivoire over Canada might be a better choice for Ballou, and that he wasn’t going to beg the player to come on board. He said that the sympathized with dual citizens, and the push and pull of two loyalties. While Herdman marked his line in the sand, he also came off as sympathetic.