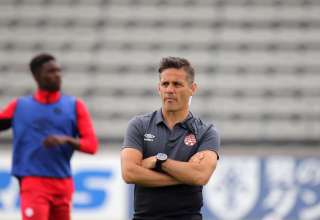 Not since the 1990s, the days of Bunbury, Radzinski and Peschisolido, has a Canadian national team offered so much attacking promise.

Canada will open the CONCACAF Nations League on Sept. 9 in Florida with a “road” game against the U.S. Virgin Islands. And coach John Herdman has brought a lot of firepower, knowing that goal difference not only influences the Nations League, but the rankings as well.

You have Cyle Larin, who has already scored three Europa League qualifying goals for Besiktas; Jonathan David, who has seven goals in seven Europa League and domestic matches for KAA Gent; Jonathan Osorio, who just inked a new contract with Toronto FC, and is the Canadian Championship MVP. Add Canadian wunderkind Alphonso Davies on the wing, and you have an attack that will be expected to rack up the goals against USVI.

And to keep the “young nucleus” theme going, Herdman said Thursday that he thinks young centre back Derek Cornelius was a “colossus” for Canada at the recent Toulon tournament, and that he represents the blueprint for the modern central defender.

In fact, the young nucleus of Canada’s teams had Herdman talking about the 2022 World Cup as a “when” not an “if.”

“There are parts of this team that I’m really comfortable with and, when I look to the future and I’m projecting out four years time and we’re in a World Cup playing against tough opposition, top opposition, which of the players are going be able to cope with that level of competition?”

Note that Herdman didn’t say “qualifying in a couple of years time.” He spoke about Canada being in the 2022 World Cup. Period.

That’s the kind of confidence that’s surrounding this team, even though the senior national side has been, for the most part, inactive since Herdman replaced Octavio Zambrano and had to, as he admitted, rebuild the program from scratch.

Some other highlights from the conference call:

Herdman on the emergence of Jonathan David:

“I think all credit to him. He’s a young man who left the country at a young age and he’s progressed through his professional career in his club. And this is the sort of pathway that tends to breed these top players, players who get out of their comfort zones and go and fight in top European environments. I think that’s a great advert for the game…My contact with Jonathan was at the Toulon tournament, he’d played for Canada at the youth level, we could see that potential in him. But certainly, working with him in Toulon, you got a sense of the real qualities of this player. Looking at his movement, competencies as a forward, his football IQ, his movement was crisp, it was smooth, the timing, you could sense that he’s come through a well-organized training system at whatever academy he was at in Belgium. It was a player that you can see was ahead of his time in his youth environment. I think he put up a performance against Portugal, and the surprise to me was that not only was he effective in the attacking phases of the game, he was very much a four-moment player. You don’t find that with young players. They’re very good in attacking organization and the attacking transition, and they’re weak in the other areas. But we found with him that he was quite complete across all four moments of the game, which is rare with young players. To see what he’s doing at Gent, and how they’re managing him through the season, it’s been great to see.”

On Jonathan Osorio, and his decision to commit his future to Toronto FC and his role with Canada:

“I think he’s a critical player. The relationship established in the first camp in Murcia was strong. And it was based on a shared respect. Both of us have not had an easy career and we’ve had to work hard for what we’ve managed to achieve in our careers. But, at the same time, there’s a clarity in his mind that there’s just no mediocrity. When we come into a Canadian camp we come in for very clear reasons. I was so impressed with him, his high-performance behaviour, some of the habits he was instilling and leading by example in many ways. He’s be in the performance suite at 11 p.m. still going through elements of the training footage. He’s obsessed with taking this team to the next level. I’ve got nothing but good things to say about Jonathan and good things happen to good people. He’s got that contract now with TFC that’s been well-earned. The evolution is he’s been resilient, he’s been gritty and, over the last two years, he’s started to show his real quality. I think part of that has been stimulated by being around some great players. When you get the chance to play with Altidore, Bradley, Giovinco week to week, they tend to elevate players. So if you’ve got that extra level in you, those players can pull it out of you.”

It would not be a Canadian national-team conference if there wasn’t talk about the players who aren’t playing for Canada. Veteran Atiba Hutchinson is recovering from surgery and is working to regain full fitness so he can return to the Besiktas lineup, so playing for Canada wasn’t in the cards. But Ballou Tabla, the Barcelona kid who has dual Canadian/Ivorian citizenship, and has not reappeared in the Canadian program since turning down an invite to play with U-20s a couple of years ago, continues to be a going concern. Herdman spoke about Tabla:

“It’s an ongoing conversation. Every time a selection comes there’s a conversation that happens. The communication with Ballou has been consistent, now, since March. There’s a two-way conversation happening… I think people who are born in Canada understand the importance of this country, but they obviously don’t understand at times the tough situations young players are put in when they’ve got dual nationality. It’s a tough decision. It’s a tough process. You’ve really got to empathize. And the timing of those decisions are cruclal for players. And, often, they’re torn. Torn between ‘is it this or is it that?’ Because they’re in love with both opportunities. And that’s what I’m learning about this situation. That this isn’t a quick fix. This isn’t jumping on an airplane and a six-course meal and a limo ride and some swag from Canada Soccer and all the things other coaches might have tried before. This is genuinely working with the player to make the right decision. That might be Ivory Coast. And I think that’s part our commitment as coaches, we have to look at what’s best for the players and give them the time to work through things. It’s got to be the right decision for them. They have to feel it’s time to come play for Canada. And, at the same time, you’re not begging players. I’m being that clear: There’s other players I’m speaking with who have the opportunity to play for Canada. But we’re not begging people. It’s that clear. If you don’t feel it in your heart to come pull that shirt on, don’t bother. I don’t want you here for commercial reasons. I don’t want you here for other reasons, because someone told you it was the right thing to do. You’ve got to feel this thing.”