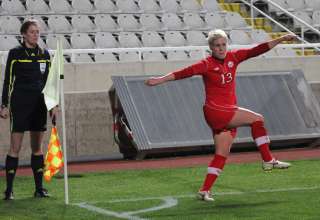 After beating Brazil last week in a friendly in Massachussets, the Canadian national women’s team fell 3-1 away to Sweden Saturday in another pre-Olympic tuneup.

With little coverage in Canada because of the focus on the U-23 men’s quest to qualify for the Olympics, Swedish sources gave a more telling breakdown of the match.

Canada was never allowed to settle into the game thanks to a wonder goal from Swedish veteran Caroline Seger just seven minutes into the match. After a Canadian giveaway in midfield, Seger spotted keeper Erin McLeod well off her line, and chipped the ball in from 35 yards out. Last season, Seger was a teammate of Canadian striker Christine Sinclair with the Western New York flash of the WPS.

Before the match, Swedish coach Thomas Dennerby had told the Svenskfotboll (the national federation) site that the focus of the match would be to work on team defence and to contain Canadian striker Sinclair — and this nation’s all-time leading scorer’s influence on the game was limited.

In the second half, Sweden extended its lead, with Lotta Schelin scoring her 42nd career goal for her country.

Kosovare Asllani made it 3-0 after she finished a through ball from Seger.

Three minutes from the end, Sophie Schmidt saved Canada from being shut out, as she finished a chance that was provided to her by teammate Christina Julien.

A crowd of 2,073 in Malmo saw the game, which was also televised nationally in Sweden.