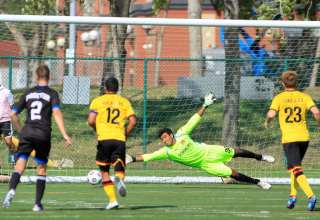 If NASL Commissioner Bill Peterson wakes up Monday morning with a massive headache, no one could really blame him.

The sendings-off of Fort Lauderdale Strikers coach Gunter Kronsteiner and goalkeeper coach Ricardo Lopes overshadowed the 1-1 draw between the league’s two top defensive teams. After being thrown out of the game, Kronsteiner and Lopes were eventually escorted from the stadium by the police, an ejection caught on national television cameras.

The actions of the Fort Lauderdale coaches have FC Edmonton brass contemplating asking the league for a forfeit. The team has confirmed it will be making some kind of formal protest. A forfeit plea is an option.

Coaches being escorted out of the stadium by local law enforcement doesn’t look god on the league.

“I will talk to (coach Colin Miller and assistant Jeff Paulus) about it,” said FCE General Manger Rod Proudfoot after the match. “We will be considering it (asking for a forfeit).”

The league released this statement: “League policy is to not comment on such matters. All games are reviewed for disciplinary purposes.”

The pair were also caught on camera trying to coach their team after they’d been tossed out — a direct contravention of the FIFA and league rules on red cards. At halftime, Kronsteiner got in a shouting match with Proudfoot, who tried to block the Fort Lauderdale coach from being near the field of play. The Strikers had a member of the bench staff going up to the stands to communicate with the coaches. And, Lopes, caught on camera, was clearly on the cellphone to the bench and making hand gestures towards it.

There have also been allegations that both coaches used threatening language towards FC Edmonton staff, and there may be more police involvement.

“I told (Kronsteiner) that being allowed in the stands is a privilege, not a right,” said Proudfoot.

The coaches were sent off before halftime. After a free kick was awarded to FC Edmonton, Lance Laing stood over the ball, and it moved before he struck it. Referee Alain Ruch ruled that the kick should be retaken. With wind gusts up to 50 km/h, the ball wasn’t settling down. On the retake, Laing’s free kick took a deflection off the Fort Lauderdale wall and went into the corner of the net.

Proudfoot said that Kronsteiner was so enraged by the re-take, that he threatened to pull his team off the field and forfeit the game right there. He and Lopes walked onto the field of play, and eventually both were sent off.

Neither would leave, so police escorted them off the field of play.

Proudfoot said he was in contact with league office; the coaches wanted to sit in the stands, so he asked about allowing them to do so. Proudfoot said when FCE coaches have been sent off on the road, they’ve been required to not leave the dressing rooms. The league, Proudfoot claimed, said it was OK for Kronsteiner and Lopes to be in the stands, as long as they didn’t try to communicate with their bench.

When both coaches were caught defying the rule, they were asked to leave. By the police.

At least the duo got to see their team tie it up before they were asked to leave the stadium outright. With the gusting wind at their backs, the Strikers began the second half with intense pressure, and it finally paid off with a goal. Off a free kick, Martin Nunez, cut by FCE out of training camp, got a free header that forced keeper Lance Parker into a tremendous save. But the rebound came to Striker Yaikel Perez, who hammered a shot towards goal. Parker dove across the goal and actually got a touch to the ball, but couldn’t keep it out.

“The ball hit me in the hands and then my face, and the wind blew it in,” Parker said.

For FCE, barring any appeal of the result, the game marked its fifth 1-1 draw in a row.

The Eddies had the advantage of the wind at their backs in the first half. And, despite goalkeeper Richard Sanchez not being able to kick the ball more than 25 yards, despite the fact there was no long-ball options available in the wind, Kronsteiner had his defence playing a very high line. Miller said that when he saw the way the Strikers had set up, it “defied belief.”

And he was bitterly disappointed that the best the Eddies could do was one goal out of the half. Striker Corey Hertzog kept drawing offside flags. A through ball that sent in Daryl Fordyce in alone went for naught, as the Northern Irish forward couldn’t get a touch on the ball to round Sanchez.

“This was a team we could have beat, that’s why I’m so disappointed,” said Miller.

The coach was so unhappy about the number of offsides and easy giveaways in the first half that he said the players to be prepared for some tougher training sessions than normal. He said he hasn’t been that disappointed with an FCE match since the fall-season opening loss at Carolina.

Had it not been for Parker, the Strikers could have got two or three early in the second half. He mad a diving stop on Darnell King, then made a diving effort to corral a free kick from Manny Gonzalez.

FCE’s Michael Cox, who came on as a sub, got a late chance to win it, but his overhead kick was stopped by Sanchez.

So, for now, the Eddies are four points adrift of the first-place New York Cosmos. A forfeit would be a precedent-setter; it would be a longshot at best.

But chances are the Strikers will be without their coaching staff for a while. When a coach is escorted out of the stadium by police, it’s not the stuff of a one-game suspension, is it?