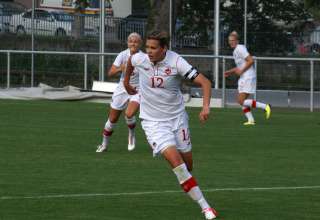 It has got the point where Canadian fans can be forgiven for being a little bit ho-hum when they hear that Christine Sinclair has scored yet again for the national women’s team.

Sinclair scored her 15th goal of the season on Monday as Canada beat Colombia 1-0 in a pre-Olympic friendly held in Switzerland. What’s notable is that the most goals Sinclair has registered in a calendar year for Canada is 16. She is now only one away from tying the record.

With a more pre-London friendlies still to be played — and Canada guaranteed at least three matches at the Olympic women’s soccer tourney, it’s a safe bet that Sinclair will set a new personal high for goals in a season before the end of July.

It’s astounding, when you think about it. Really, Sinclair will likely shatter her record — even if, as she’s stated earlier, she is going to take the fall off so she can look at some of her professional options going forward.

The win is Canada’s 10th of the year. Colombia is a rising program that gave Canada a very difficult time in their one previous encounter, in the semifinal stage of last year’s Pan Am Games. Canada beat Colombia 2-1 in that match, with Robyn Gayle netting a last-gasp winner for Big Red.