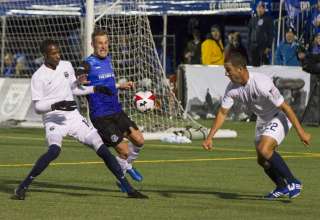 Dean Shiels tenure as an Eddie lasted a little less than half an NASL season.

Brought in as a “difference maker”  before the start of the campaign, the Arsenal youth product and former Glasgow Rangers player was expected to be the linchpin for FC Edmonton’s offence. But, an injury-plagued spring season meant that Shiels scored just once so far in 2017. On Monday afternoon, the Eddies announced that Shiels and the team had parted ways.

The club stated that Shiels was released due to personal reasons.

“When Dean arrived we knew he had genuine quality about him, however his family situation in Scotland wasn’t great,” FC Edmonton coach Colin Miller was quoted in a release issued by the club. “That was the sole reason he’s leaving us. He enjoyed the club, the staff and the players, but his family situation needed to be resolved and he had to leave very quickly. It’s unfortunate and we wish Dean and his family the best of luck in the future.”

Albert Watson now has his Canadian permanent resident status — and now counting as a domestic on the Eddies’ roster. Shiels is no longer with the Eddies. That means that Miller has two free international slots as we near the end of the NASL spring season.