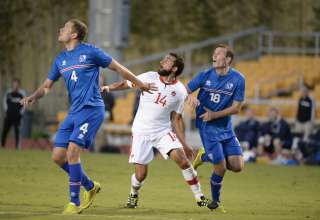 So, national-team coach Benito Floro called in an experimental, youthful lineup to face Iceland in a pair of friendlies, the second of which was played Monday.

Canada lost the first game, 2-1. On Monday, the Canadians had to settle for a 1-1 draw with Iceland as Hólmbert Fridjonsson converted a second-half penalty after Manjrekar James committed a foul in the box.

With so many new, fresh faces on call in the two Florida friendlies, of course it would be the elder statesmen who would score both goals. Dwayne De Rosario, currently without a club, headed home a goal in the first game and scored from the penalty spot in the second. He now has 22 goals in his Canadian national-team career. He’s padded his lead atop the Canadian all-time scoring list.

De Rosario will turn 37 years of age in May. And he still remains our country’s best scoring option. The fact that De Ro is a necessity, and not a luxury, for Floro, is a sign of just how badly we have failed as a nation to produce goal-scoring skill players. When Canada begins World Cup qualifying this June, it would be hard to make a case for not having De Ro on the squad. It might be hard to make a case that he shouldn’t start.

And with De Ro still scoring goals for Canada — and being part of the national-team set-up — so grows the need for a club to take a chance on him, so he can have minutes under his belt when Canada starts playing games that matter again.

It doesn’t matter if its Dominica or the British Virgin Islands that Canada will face in World Cup qualifying in June. The fact is, our program is not at the spot where we can consider anyone a minnow. We’ll need our best scoring options for both of the legs of that CONCACAF second-round match. And DeRo continues to prove himself to Floro.