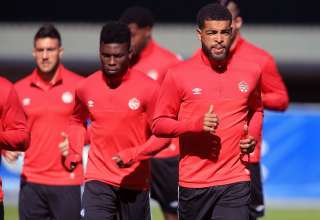 Canadian coach Rob Gale has held to the same philosophy throughout the CONCACAF U-20 Championship; that he has to keep the squad fresh.

After losing two of its first three games at the tournament, Gale had some difficult roster decisions to make for Monday’s must-win date against Cuba. The Cubans won 2-1, and Gale’s rotation policy will now be under scrutiny.

He elected to keep Jordan Hamilton, who scored twice against Haiti in the opener and had some effective runs in a loss against Mexico, on the bench for the start of the Cuba game; instead, Cyle Larin got the job up top. Larin, unfortunately, has not lived up to the No.1 MLS SuperDraft pick hype throughout the tournament; he was ineffective in the loss to El Salvador, and headed the ball over the goal on his best chance of the game against the Cubans.

The decision to leave Hamilton on the subs’ bench at kickoff helped limit Canada’s goal-scoring options. And Hanson Boakai’s absence will force Gale to answer even more questions.

In Canada’s previous match, against El Salvador, Boakai responded with a wonderful second-half performance. He scored a fantastic goal and created several more good chances. When he ran at defenders, they were on their heels. Even though Canada lost on a last-kick-of-the-game goal, there was no denying that Boakai roused a sluggish offence from its slumber, and was our country’s best player on that day.

Boakai had been nursing an injury going into the tourney, and Gale warned that his minutes would be limited. n aggravation of the existing issue or a new knock would be the only explanations to keep the kid out of this game.

With only one win out of its first three games, Canada had to treat the game with Cuba as a must-win. The Canadians no longer had the luxury to look past Cuba and save bodies for the final group-stage game against Honduras. The Canadians needed to use their best win-now options. So it was strange to see Hamilton — who didn’t start the game against El Salvador, either — not come in until just after halftime. And Boakai’s total absence from the match was just as mysterious.

Through the two most recent games, Larin has become the favourite for minutes, even though Hamilton’s returns have been better. For sure, Hamilton may have needed some rest against El Salvador — hence why he didn’t come into that game till the 81st minute — but Larin had a chance to prove something in that game, and didn’t come up with a finished product. And with that rest, Hamilton could have been ready to start against Cuba.

Even if Hamilton wasn’t at 100 per cent, if Hamilton was only available for 45 minutes, why not use him in the first half, where Canada’s most effective striker could help peg the hosts back and set a tone for the game?

Canada gave up two awful goals in the first half — both to Frank Lopez. On the first, keeper Nolan Wirth totally flubbed his clearing attempt. The ball rolled right to Lopez, who chipped the ball over Wirth and into the goal. And Lopez was allowed to climb and head in his second even though he was surrounded by Canadian defenders in the box.

Jackson Farmer knocked home a volley in the second half.

The Cubans bunkered in the second half and saw out the rest of the game. And Canada fell to a team that had lost to the Mexicans 9-1 earlier in the tournament.