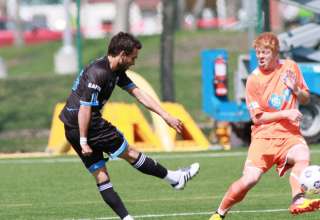 And, for his efforts, he was named the NASL’s Offensive Player of the Week on Monday. Saiko scored his first career professional hat trick as FCE beat the RailHawks Sunday.

The previously winless Eddies went into the second half of their match with the RailHawks tied 0-0. But, with the wind at their backs in the second half, the home team was urged to try and take some shots from distance by their head coach, Harry Sinkgraven.

And Saiko must have been listening. His 32-yard blast (we can tell because of the football lines at Clarke Stadium) flew into the goal after a leaping attempt by Carolina keeper Ray Burse to fingertip the ball away proved fruitless.

But, Saiko followed it up with a curling, well-placed chip over Burse that found the back of the net.

A penalty-kick conversion finished the day for Saiko, who got to celebrate one of his best days in pro soccer in front of his family and friends in his hometown.