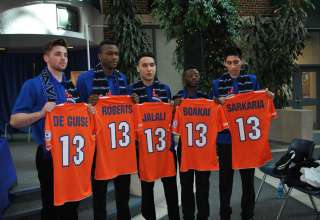 Talk about a baptism of fire.

Judging by Tuesday’s pre-Amway Canadian Championship training session at Commonwealth Stadium, FC Edmonton’s Mallan Roberts will finally get a chance to play with the senior squad. He scrimmaged with the starting XI. But, his debut won’t come against NASL opposition — he’ll face MLS competition.

Roberts vs. the Vancouver Whitecaps front line promises to be one of the more fascinating storylines that will develop out of Wednesday night’s first leg of the Voyageurs’ Cup semifinal at Commonwealth.

With team captain Albert Watson unavailable as he recovers from an MCL tear, and on-loan central defender Carlyle Mitchell unable to play against his parent club, coach Colin Miller had Roberts, 20, paired with Adrian LeRoy.

“I’m very excited,” said Roberts, the hulking centre back who was a provincial high-school football all-star and actually got a look-see from the CFL Eskimos. “I have a little bit of nerves… but I will try not to boost it as much as possible. I want to enjoy the moment. It’s a big showcase not just for the club, but for myself as well.”

FCE supporters have been waiting for the chance to see Roberts play for the senior squad. He would have been promoted last year, if his passport situation would have been sorted out. Roberts came to Canada from Sierra Leone with his father. Roberts said Tuesday that his passport is expected in the coming month. When that’s done, he can get his work visa, which means he can start traveling to the U.S. for NASL road games.

“I think this is a massive opportunity for the young man,” said FCE coach Colin Miller. “He already has all the athleticism you’d want. If selected, he’s going to get an opportunity to play against very good players in a high-tempo game.”

Miller said Roberts’ biggest challenge will be to keep his focus. Young defenders can often get caught ball-watching. As well, Roberts was famous on the Reserve squad for his fearless, physical play. He has to make sure he doesn’t over-commit at times when discretion is the better part of valour.

Roberts isn’t the only one of the players promoted from reserves to senior squad who might see the field Wednesday. Miller confirmed that 16-year-old Hanson Boakai, who just returned from Panama, helping the national U-17 side qualify for that age group’s World Cup, will be in the squad and could come in as a sub.

“I can’t do with my hands what he can do with his feet,” Miller said of Boakai.

And, Sean Fleming, the national U-17 coach, was at FCE’s training session Tuesday.

But Mitchell isn’t the only absence Miller has to worry about. Midfielder Wes Knight, the former Whitecap who was counting the days ahead of the ACC semifinal, is confirmed out for at least six weeks with a broken foot. He suffered the break in the first half of Saturday’s loss to Minnesota.’

Mitchell took part in training until a knock forced him to the sidelines. As a loaned player, he feels like he is in between a rock and a hard place. In fact, he didn’t want to talk much about Wednesday’s game at all.

“I’m a loaned player. I’m not acting as a spy, I’m not doing anything,” said Mitchell. “It’s uncomfortable for me. Right now, I am currently with FC Edmonton, but I play for the Vancouver Whitecaps. All I can say that is on Wednesday I will sit and watch football, and the better team will win.”