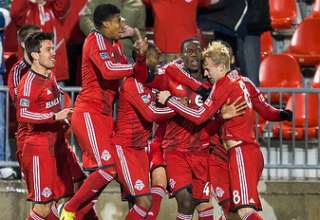 New Maple Leaf Sports and Entertainment president Tim Leiweke has promised radical changes; from trying to get Maple Leafs fans to look to the future rather than the team’s distant past, to finding a way to make the basketball Raptors appeal to a national audience. There’s suggestion the Raptors might get a name change. So, we wondered if Canadian soccer followers also felt it was time to do something more radical to TFC; that, after almost seven years of MLS futility, if it was time to change the team’s name or possibly even the colours.

Or, did TFC’s history — from the mass seat-cushion toss that followed Danny Dichio scoring the first-ever goal in team history, to four Voyageurs’ Cups — mean enough to keep the Reds the Reds?

We asked the question: Tim Leiweke has promised overhauls of TFC and the Raptors. Should he consider a name change for TFC?

We have now wrapped up the voting.

We received 163 votes, a fair sample. And 60 per cent of you voted “no way,” that the name and colours were untouchable. That’s a solid but not not overwhelming split.

Of the 40 per cent that believed the name should be changed, the majority wanted to see the old Blizzard name and colours revived. You felt that Toronto soccer in MLS should honour the old NASL traditions as the Vancouver Whitecaps, Portland Timbers and Seattle Sounders do with their names — or the New York Cosmos, Fort Lauderdale Strikers and Tampa Bay Rowdies of the new NASL do as well.

Now, Southern Ontario keeps getting mentioned as a market for which the NASL has plans, so you have to wonder if the Blizzard name might get resurrected, but not in MLS. Mind you, that might take a while, as Calgary and possibly Winnipeg look like they are ahead in line in terms of NASL expansion.

Here are the should-TFC-change-its name vote result:
No way: 60 per cent
Blizzard! Blizzard: 20 per cent?
Start over, new name, new colours: 13 per cent
Keep the colours, change the name: 7 per cent

You can put the Blizzard and “start over” crowd together, as they both would support a new brand. Together, they made up 33 per cent of the total. So a full one-third of those polls think that everything about TFC needs to be changed.

What was interesting is that the splits were set very early on into the poll — about 20 votes into the process — and then stayed constant as more people clicked on their selections. There weren’t any real surges in votes for one of the particular options. That’s a sign that, even though our sample was relatively small, it would likely be an accurate reflection of our readership.

But, this where a disclaimer is needed. This isn’t a Toronto-based site. It’s a national site. So there could be votes in there from soccer supporters who were never really emotionally invested in Toronto FC in the first place; indeed, there could be votes from those who actually dislike or downright loathe the club.

And we had some comments left on the poll. Here is a sampling of what you thought: The readers get the last words…

“They should have been either Toronto Blizzard FC or Toronto Metropolitan FC (“Metros”) from the start. One connects with an NASL and CSL pedigree, the other connects with the 1976 North American champions.” – Seathanaich

“TFC already is a club with history. A crappy history but still. Plus the name rocks.” — Footy