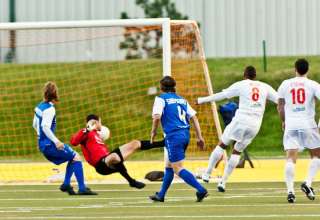 Matt Watson scores a winning goal during the 2011 NASL season.

Let the exodus begin! Matt Watson is leaving the Carolina RailHawks for the Vancouver Whitecaps.

On Friday, the Whitecaps announced that they had signed the former RailHawks’ midfielder.

“Matt has consistently been one of the best players at the North American second division level over the past four years – three of which I had the pleasure of coaching him,” said Whitecaps head coach Martin Rennie in a release issued by the club. “He has had several offers to join Major League Soccer teams, so I am really pleased that he has chosen to take the next step in his career with Vancouver Whitecaps FC.”

Before Martin Rennie announced in August that he was going to become the coach of the Vancouver Whitecaps, the Carolina RailHawks were by far and away the best team in Div.-2. If you’d seen them play on a regular basis, you would think that they’d regularly beat many of the lower teams in MLS, such as the New England Revolution or, ahem, the Whitecaps.

After the announcement was made that Rennie would take over as the Whitecaps’ boss, the RailHawks imploded.

But, judging how they dominated the NASL for three quarters of the season (just not the important part at the end), Whitecaps fans knew it was just a matter of time before Rennie brought some of his old charges to Vancouver.

No, Watson doesn’t have the high-scoring appeal of NASL MVP Etienne Barbara or forward Pablo Campos. Watson scored just three times in 2011. But, if you followed the RailHawks in 2011 (and, I saw them a lot as an NASL commentator and colour voice for FC Edmonton), you noticed Watson, how he controlled the ball and was a major link in the midfield. Each time I saw the RailHawks, I was more impressed with Watson than I was with Barbara or Campos.

And, NASL fans will remember that it was Watson who was on the end of the red-card tackle from ex-FC Edmonton defender John Jonke.

But, now that Watson is on board, you have to wonder if there are more coming. Montreal as also dove in for NASL players, both from its own 2011 roster and the Fort Lauderdale Strikers, but, with just one Canadian out of 21 roster spots, it needs to focus on domestic talent with some of its remaining contracts. So, we will have to wait and see if Rennie is done raiding his old team.