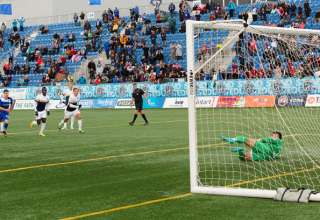 Titan is the name of the largest mobile HD screen in North America. It is 39 feet wide by 22 feet high, and it is stationed at the north side of Clarke Field, giving FC Edmonton’s fans a clear view of whatever happens on the field. Repays are crystal clear and, ahem, larger than life.

Titan may have been the Eddies’ Man of the Match Sunday. The replay screen was front and centre in what was a controversial finish to FC Edmonton’s final regular-season home game of 2016, a 1-0 win over the Jacksonville Armada.

The game was scoreless in second-half stoppage time; the Eddies mounted one final attack. Midfielder Sainey Nyassi danced on the edge of the penalty area, looking to get by the Armada’s Mechack Jerome. Nyassi was brought down by Jerome, and referee Yusri Rudolf awarded the Eddies a free kick inches outside the box.

Nyassi and the Eddies howled in protest, arguing that foul occurred inside the area. Then Titan came to life, showing the incident in glorious slow motion. Nyassi’s feet were inside the box when he was brought down. Every FCE player on the field pointed to the screen.

And then Rudolf pointed to the spot. He changed his mind. The free kick became a penalty kick, and Daryl Fordyce beat keeper Miguel Gallardo to decide the game.

It needs to be stated the Rudolf was clearly talking on his headset to another official about the call. But the fact is, he changed the call after the crowd and FCE’s players howled after the replay was displayed in the stadium. But, it could have been unfortunate timing, that he got information from his linesman just as the replay was coming to a head.

This is the key, though. There wasn’t a person in the stadium who believed that anything other than the replay influenced the decision. And that included the players and coaches of the Jacksonville Armada.

“You can’t use replay to change a call,” Armada coach Mark Lowry fumed after the game.

“But, if you’re going to use it (replay), Mechack got his foot on the ball. Then change the call.”

Lowry said he wouldn’t like it if the teams were reversed. He wouldn’t want to get a win based on such a controversial call.

FCE coach Colin Miller said that, no matter what happened at the end of the game, his team deserved the three points.

“We’ve had so many bad decisions go against us over the years, it’s nice to have one in our favour.”

The truth is, the game should never have got to the 90-minutes-plus mark at 0-0. The Eddies should have had a lead at halftime against a team that was playing its fourth game in less than two weeks.

But the one miss that will be talked about came in the first half; Ameobi made a hard pass into the penalty area that found Corea in front of the Armada goal. The net was empty. Corea was maybe three feet out.

He sent the ball well over the goal. Yes, the ball came through a crowd of players and looked to take a bad bounce just before it got to him, but Corea was almost down to the goal line.

Ameobi went over to console Corea after the miss.

“It can happen to any of us, especially with this turf, when the ball bounces awkwardly before it comes to you,” Ameobi said.

The Eddies knew going into the game that they will be going to Indy to face the Eleven in the NASL Championship Semifinals. So, Miller made some decisions to stretch his squad. Captain and league MVP candidate Albert Watson wasn’t even in uniform. And his central-defence partner, Pape Diakite, didn’t start.

Marko Aleksic, an Edmonton academy product, got his first NASL start. He’s appeared in games before, but he hadn’t been in the starting XI until Sunday.

“It didn’t feel that fast today,” said Aleksic. “I felt the team was very organized and that really helped me.

“First half, they caught us on two breaks, but it was nothing serious. The first half, we outplayed them 100 per cent. The second half was an even game, it was kind of chippy, nothing really going on, no pressure on the back line. It was pretty chill, that second half.”

The ending? Not so chill.