July 04, 2022
9 New Articles
Home Canadian Premier League CanPL News and Notes Radzinski: CanPL “will give hope to any boy who dreams of wanting to play and wanting to compete” 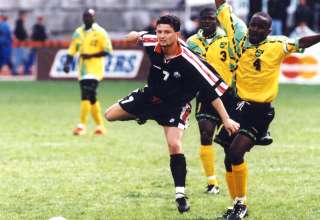 Tomasz Radzinski in action for Canada

Tomasz Radzinski was a teenager when he arrived in Canada, via Germany, from his native Poland. But, when he arrived, he was shattered when he saw no mention of soccer in the sports news.

“There was no games, no schedule, no league, and I believed that my dreams of being a professional soccer player had been kind of crushed,” he said.

But then, his dad found out more about the Canadian Soccer League, the pro circuit that existed in Canada from the late 1980s to early 90s. And Radzinski found a home with the North York Rockets.

That time in North York was Radzinski’s springboard towards 46 national-team appearances, club glory in Belgium, Champions League appearances and stops in Everton and Fulham in the English Premier League. Radzinski was named to Canada’s Soccer Hall of Fame last week, and will be honoured in a ceremony later this year.

Radzinski, who is now working as a consultant for agency, Atticus Sports Management, in Belgium, is watching the Canadian Premier League from afar. And he believes that the nascent league, which is set to kick off in 2019, is absolutely a must for Canadian players.

“I think, for young Canadian players, it will be the same story for them like it was for me,” Radzinski said. “It will give hope to any boy who dreams of wanting to play and wanting to compete. Of course, it has to be done the right way. It has to be done right the first time. They are in a lot of the same cities that the CSL was. There will be lots of travel for the players, but they’re going to get to see a lot of the country. I think it’s important for Canada to develop its own Premier League, apart from MLS.”

Radzinski is confident when he speaks to the media. He should be. Part of his job with his agency is to consult some of its young clients, including many members of Belgium’s youth national sides, on how to deal with being in the public eye.

“I try to make sure they don’t do stupid things,” he says. “It’s not a very happy world for young players with big contracts.”

He said the pressure of money and the media spotlight can be too much for some players. And he said players need to understand that, within a flash, a career can end. An injury, a bad run of form, and that one big contract is the last one you’ll have.

Before that, he was technical director at SK Lierse, a club which just declared bankruptcy.

“It’s very sad, it’s very touchy right now,” Radzinski said of the Lierse situation. But he said that, when he was there, there were no signs the club was in financial trouble or wasn’t well-run.

“I never would have considered that there would be any financial difficulties,” he said.

As for the Hall of Fame nod, Radzinski said he was “shocked” when he got the call.

“It was very sudden, but the look of joy was on my face. I just couldn’t believe it would be me. And it was very special that I would be inducted the year following my friend and captain, Paul Stalteri.”

Radzinski rates a 2000 Champions League run with Anderlecht as his best-ever club experience. Included in that was a 2-1 win over Manchester United in which Radzinski bagged a brace. He scored on one the break, another on a one-touch effort that went just inside the post, and if not for a fantastic save from Fabien Barthez on a point-blank shot, the Canadian would have had the hat trick.

“No one gave us a chance whatsoever,” Radzinski recalled. “But we won the group with Dynamo Kyiv, PSV and Manchester United. Then we went on to play Real Madrid, Leeds and Lazio in the next group, and we just missed the cut. To be involved in something like that, for me, it was precious.”

But, enough dwelling on the past. Radzinski is looking forward to the near future, when he will be heading to France to watch the Toulon U-21 tournament. Canada will be participating, and he is thrilled to have the chance to watching this country’s best young players in action.

“For me, it will be a chance to continue my great footballing adventure.”