May 16, 2022
9 New Articles
Home NASL & USL FC Edmonton Porter gets deadline from FCE: Sign deal or we move on without you 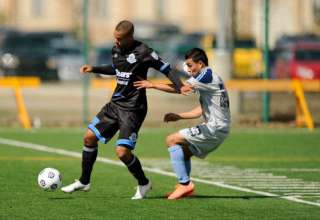 Kyle Porter has been given a deadline by FC Edmonton coach Colin Miller. Either Porter signs the deal offered to him by the club, or the team will move on without him.

Miller confirmed today that Porter, the former Whitecap who has scored 12 goals over the last two seasons for the Eddies, has been offered a new contract. But the Canadian forward hasn’t signed the deal yet — and Miller said the club can’t wait on him. Porter has been given a deadline to make up his mind. And while the coach wouldn’t say the exact deadline day, he said the time is coming up, fast, because the team has to make alternate plans for life without Porter if the player chooses to leave.

“We have done everything we can do with Kyle and his agent,” said Miller. “We have made him a good offer.”

And Miller said he “had a real go” at Porter, urging the player to live up to his potential.

“I like Kyle,” said Miller. “And I think we can get a lot more from him. If he was playing at the level that I think he can, he wouldn’t be at this club. He’d be at a higher level.”

Miller also confirmed that Brazilian forward Julio Cesar da Silva Rodrigues, who the team tried to bring on loan last season but didn’t get his paperwork done before the transfer deadline, will not be with the club in 2013.

But he is hopeful that a recent scouting trip to Europe will yield two or three new players.

“We hope to have some announcements in the next two or three weeks,” said Miller. “I have said that there are changes that are going to be made. I am going to put my stamp on this team right away. I felt that this team was a bit soft. I have already given fitness programs to the players. From the games I have seen from last year, we have to be a lot more competitive.”