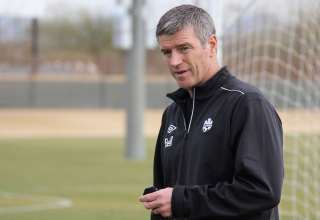 Colin Miller, the interim head coach of the Canadian men’s national team, said we can expect to see a brand new side for two upcoming friendlies.

Miller, FC Edmonton’s head coach and national-team veteran, was named the team’s interim coach Monday. He’ll take the reins for a camp that begins Jan. 19, and includes friendlies against Denmark Jan. 26 in Tucson, Ariz. and a game against the Americans Jan. 29 in Houston.

While Miller has had some confirmations, he said he can’t divulge any of the roster at the moment.

“But I can say that the team will bear very little resemblance of the squad that went to Honduras,” said Miller. “It’s my goal to make sure the players who are coming in will be motivated and will want to help the program move forward. Playing for the national team is a privilege, not a divine right.”

Canada lost 8-1 to Honduras in its last competitive match, which eliminated it from World Cup qualifying.

Miller confirmed that the interim tag only lasts for the January matches, not until a replacement for Stephen Hart is found. As soon as the games are done, he said he is “100 per cent committed to FC Edmonton.” And that means heading down to Florida to look at the players on offer at the NASL combine.

“Doing both jobs has been quite easy, to be honest,” said Miller. “(FC Edmonton assistant) Jeff Paulus as well as (director of soccer) Joe Petrone will take care of certain things, and I still have final say on any decisions. As for the national squad, we’ll be announcing team likely later on next week. I am still checking with the clubs on player availability. It’s pretty straightforward.”

While Miller said he can’t divulge any names at the moment, Canadian Press reported that Canadian U-23 and Boston College product Kyle Bekker got the call. On Monday, MLS announced it had signed Bekker ahead of the SuperDraft.

Miller said that while some of the players will be new to the senior side, he doesn’t want to throw in any players “into the deep end” and that most of his picks will have some sort of Canadian junior-team experience.

Does that mean some of FC Edmonton’s players, such as Canadian U-23 Shaun Saiko, could get calls? Miller said he hasn’t had any issues with conflicts of interest, and wouldn’t confirm one way or another if he’s looking at players from his club side.

But he did say that this interim job could lead to some benefits for FCE down the road.

“Players might look at it and say, ‘the national-team coach is the coach of FC Edmonton.’ And maybe that could lead to one or two players who could end up playing for this team.”