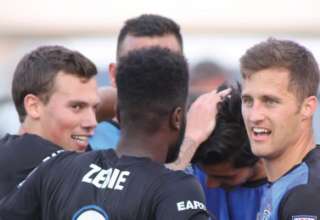 It’s the second half of Friday’s game between FC Edmonton and North Carolina FC at Clarke Field. The Eddies are down 1-0. They have lost the previous four games they’ve played by 1-0 scorelines.  The Eddies have hit a post and have had two shots — in the same attacking sequence — cleared off the line. It feels like the soccer gods have decreed that the Eddies will never score again.

Then, Tomi Ameobi equalizes on an inch-perfect cross from Ben Fisk. Three minutes later, and Mauro Eustaquio slides to get onto a low pass from Sainey Nyassi. The ball goes off the post and in. The Eddies go on to win 2-1 — and the NCFC/Carolina RailHawks’ streak of never winning a game at Clarke continues for another game.

“A Portuguese player once said, the goals come like ketchup. Once you get one, all the rest come after it,” said Eustaquio. This is especially poignant considering that Eustaquio grew up in Leamington, Ont., which is the tomato and ketchup capital of Canada. Damn, do I love it when the player provides the poetry for me. Makes this “game story” thing so much easier.

“Sainey saw me make my run into the box, and luckily the ball went in.”

The Eddies’ roaring second-half comeback downplayed what was a miserable night for referee Yusri Rudolf. With Canada Soccer’s head of referees, Isaac Raymond, in attendance, he put on a woeful display that will continue the ongoing discussion about the lack of professionalism and the poor quality of officiating in North American pro soccer. To say Rudolf was simply out of his depth would be a compliment. if NASL Commissioner Rishi Sehgal can sleep soundly after watching a refereeing performance that wouldn’t be good enough for division-five men’s league, then maybe we’re past the point where we can have any hope that the terrible officiating that marks game after game will be improved.

FCE coach Colin Miller was forced to take off central defender Pape Diakite in the first half after Rudolf showed him a yellow for dissent and later talked to him after a collision that saw NCFC’s Connor Tobin sent into the ad boards. In the second half, Rudolf gave NCFC’s Jose Carranza a yellow for… winning the ball cleanly.

But, in what might be the worst piece of officiating we see in MLS, NASL or USL in 2017, somehow, late in the first half, Rudolf saw it fit to call a foul on FCE keeper Nathan Ingham after a big collision with NCFC’s Lance Laing.

With NCFC up 1-0, Laing charged deep into Edmonton territory to race for a loose ball. Ingham came out of his net, and — with a slide — clearly got to the ball first. Laing came in at full speed, and his elbow connected with Ingham’s head. Ingham had to leave the game and, while he seemed OK afte

r the match, it’s likely the keeper will miss next week’s FCE match at home to the New York Cosmos.

Most referees would have sent Laing off; but Rudolf

called the foul against Ingham. It was bizarre.

“During the live game, I thought

Nathan won it quite clearly,” said Eddies coach Colin Miller. “But then when I see it (on the Titan video screen) I am pointing up to Isaac, the CSA’s top referee assessor, and I’m saying ‘you have to see that.’ Not only has our keeper got his bell-end rung, he’s out of the game — and it’s a free kick against us.”

Miller said he didn’t feel Laing’s challenge was malicious; that the player’s momentum just carried him into the keeper.

“It seems to happen to us every week, where there seems to be, I don’t know how else to put it, but a shocking call,” said Ameobi. “Even the fourth official, she knew as soon as he made the call that it was the wrong one.”

The Eddies began brightly, with winger Sainey Nyassi poking a shot just wide of the NCFC goal at the 12-minute mark.

But it was NCFC that took the lead at the 24-minute mark. Nazmi Albadawi’s shot, set up by Laing, was parried away by Ingham. But the Eddies couldn’t clear the ball and NCFC got a second attack. The ball came to Laing in the box; his attempt was blocked by defender Albert Watson. But the ball came to NCFC’s Dre Fortune, who shuffled by FCE’s Sabri Khattab and then launched a shot into the top corner.

The Eddies, as has been the case throughout the previous four scoreless games, created golden chances to score, but couldn’t find the target. Soon after the second half began, Nyassi got his head to a wonderful cross from Ben Fisk, but the ball came off the post.

Later in the half, the Eddies had an even better chance to equalize, but threw it away. Nyassi got the ball on the wing, and his shot was cleared off the line by NCFC defender Paul Black. The rebound came to Ameobi, who had to only beat another NCFC defender, Christian Ibeagha, who was on the line. But he put the shot right at Ibeagha, who managed to block the ball and deaden it enough so out-of-position keeper Brian Sylvestre could get back and dive on it.

But, the Eddies didn’t give up. Winger Ben Fisk, who played his best game of the season, laid off a perfect cross to Ameobi for an equalizer, and the sense of relief in the stadium was palpable.

“I thought Fisky epitomized everything about the club tonight,” said Miller. “He had some chances, some were on target and some weren’t on target, but he never stopped. He continued to go, he continued to go. He was an inspiration. He’s got terrific pace and ability, and it’s always a threat against a team that’s tired.”

Fisk said the team took the negatives from early in the game and used the energy to fuel the comeback.

“It was a really frustrating first half,” said Fisk. “I don’t think we were very happy, I know I wasn’t. I think I can speak for the rest of the team, we were all pretty pissed off. We came out and did well to translate that frustration into results.”

That set the stage for Eustaquio’s winner two minutes later.

NCFC’s Matt Fondy had a great chance to beat FCE’s sub keeper, Tyson Farago, in time added on, but, with the goal only a few feet away, he screwed his shot well wide.