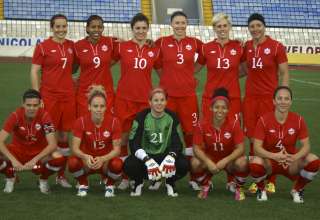 Kelly Parker scored and had a role in setting up two others as the Canadian national women’s team opened the Cyprus Cup Tuesday with a comprehensive 5-1 win over a Scotland side that’s missing its best player.

Sophie Schmidt scored twice, including the winning goal, while Christine Sinclair and Melissa Tancredi also got goals for the Canadians, who are preparing for the 2012 Olympics in London.

Parker — who played for the Atlanta Beat of WPS last season — scored from over 20 yards out, just six minutes into the game.

But Schmidt scored goals on either side of the halftime break to put Canada up 3-1. According to the Canadian Soccer Association’s Twitter feed, Schmidt’s second goal came after a passing sequence from Parker and Sinclair.

Sinclair made it 4-1 before Tancredi got the final goal, which came off a cross from Parker.

The Scottish side came into the tournament without its top all-time goalscorer Julie Fleeting, who is expecting her second child.

The Canadian game wasn’t as affected by the same kind of rain and hail that plagued the Canadian men’s training session on the other side of the island. The Canadian men play Armenia on Wednesday in Cyprus.