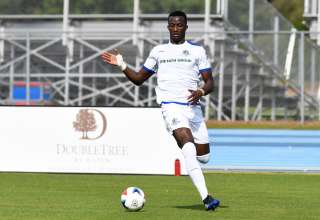 It’s been an odd situation: Thanks to visa issues, FC Edmonton defender Pape Diakite hasn’t been able to work in Canada so far this NASL season. He isn’t training with the club and can only join the Eddies when they travel to the United States for road trips.

But, for the reigning NASL Young Player of the Year, it looks as if the work visa soap opera is about to come to a close. Diakite didn’t train with the Eddies on Wednesday at Clarke Field, but will meet the club when it arrives in south Florida ahead of this weekend’s clash at Miami FC.

The good news is that it looks as if Diakite will be good to travel on with the Eddies to Ottawa, where they’ll face the USL’s Fury in next Wednesday’s first leg of their Canadian Championship opening-round series.

“He’ll be standing in Miami when we get to Miami,” FCE coach Colin Miller said of Diakite. “The paperwork is now finally done, dusted and completed and he can now get back to being an FC Edmonton player rather than being on a holiday for the last couple of weeks. It was just an unfortunate situation, it was a visa issue that we found out about very late. And, unfortunately, he wasn’t able to come into Canada. But, now, everything has been cleared, everything should be FedExed from London, and the big fella should meet us up in Miami on Thursday.”