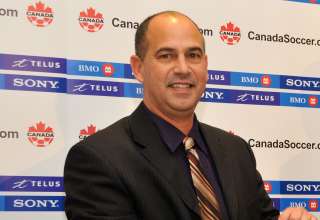 Canadian coach Stephen Hart is still waiting on an answer from Junior Hoilett.

The Blackburn Rover from Brampton, Ont. has once again asked the Canadian Soccer Association to be patient, and declined to join the national team for its Feb. 9 friendly against Greece.

Coach Stephen Hart named his lineup Thursday (scroll below), without Hoilett, who has flourished after new Rovers coach Steve Kean’s more offensively minded system and has been a regular starter over the last month.

“It’s the same story: ‘Please give me more time,’” said Hart in a media conference call.

Hoilett isn’t the only headache; on Thursday morning, Hart learned that he will lose central defender Kevin McKenna to a back injury. According to Hart, McKenna “broke down” in training with FC Koln.

With Toronto FC training in neighbouring Turkey, Hart is considering the possibility of adding Nana Attakora or Adrian Cann as a last-minute replacement for McKenna, even though he wants to keep his lineup as MLS-free as possible. He originally intended to have no MLS players on the roster, simply for the fact that players in the league have just begun their training camps. But, because of the numbers game, Will Johnson, Dejan Jakovic and Dwayne De Rosario were drafted in.

“My preference is they (MLS players) get into their preseason — that they get in game shape,” said Hart.

Because the Wednesday game is a standalone friendly, with only one training day before the match, Hart had to exclude some Canadian players who have matches late Sunday or on Monday. And, because of the fixture congestion throughout Europe caused by a slew of bad-weather postponements, he had to rule out several prospects.

Still, Hart is hopeful the team can respond; he wants to see how the squad reacts to playing in an environment as hostile as Greece.

“It’s an international game against a very good team. It’s a fortress when they play at home… It’s more important how we play, how we approach the game, how we manage the game.”