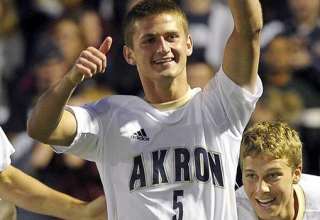 It’s rare for Caleb Porter to take a break from his passion. The University of Akron head coach is a self-professed soccer junkie, constantly watching, reading about and developing tactics for the game so it was a strange thing for him to put everything aside for a month following his Zips’ 1-0 win over Louisville in the NCAA title match on Dec. 12.

The championship was Akron’s first as a school. But given the stamp the 35-year-old Porter has put on the program in his five years in charge, it might not be the last.

“It’s the culmination of a five-year process,” says Porter, a native of Kalamazoo, Mich. and a former three-year captain for perennial power Indiana University. “When I took the job, my vision was to get to this point and build the program to the level where we would be able to realistically win a national championship. That was something I believed from day one that we could do. I set out to do it with the formula, the blueprint that I had. There are a lot of things that go into that blueprint; recruiting, building a culture, style of play, scheduling.

“We felt we had the blueprint to do it. It’s been a fun journey.”

Porter is keen to see college soccer, and the game at all levels, grow. As someone whose playing career ended at 25 because of injury, he takes pride in preparing young players and considers grooming talent for the next level one of his main priorities. A look at the recent Major League Soccer draft suggests Porter is doing more than his part. Akron’s players were, to state the obvious, a focal point for MLS clubs.

After the Vancouver Whitecaps selected USA U-20 national team forward Omar Salgado first overall, Zips went in the next three slots and five of the next seven. There was midfielder Darlington Nagbe going number two to Portland, midfielder Perry Kitchen to D.C. United in the three spot, defender Zarek Valentin to Chivas at number four, defender Kofi Sarkodie to the Houston Dynamo at number seven and at the eight spot, Vancouver dipped into the Akron talent pool, selecting midfielder Michael Nanchoff. And in the second round, defender Chris Korb went to D.C. United (31st overall) and midfielder Anthony Ampaipitakwong to San Jose (33rd).

And we can’t forget that Teal Bunbury left Akron for the 2010 MLS SuperDraft after winning the M.A.C. Hermann Trophy as the top player in college soccer. In 2009, Akron’s Steve Zakuani went No. 1 in the draft and led all rookies in scoring in his debut season with the Seattle Sounders.

It was an amazing tribute to the strength and rising profile of the university’s program, a draft dominance no school in any sport could match. While the talent of those seven Zips is obvious, their participation on a side that plays structured, attractive football has been as influential as the magic in their feet.

“They weren’t the finished products,” Porter says. “They needed to be polished, they needed to be groomed. The neat thing about what we’re doing is that it’s collective soccer. There are a lot of talented teams that don’t win and teams that rely on talent individually. What we try and do is put the pieces together. Let the individual flourish within the fabric of the team, within our style.”

The pretty one- and two-touch soccer the Zips play is, in Porter’s opinion, important on many levels. It has attracted fans. It has also produced some lop-sided results throughout a campaign that culminated in a national title. Akron lost just three matches, scoring at least a goal in all but one game the entire season. But Porter also sees his side as a model for others, be it at the college level or high school. NCAA rules allow for liberal substitutions but the Zips refrain from doing that. Porters says he doesn’t buy into that way, believing it’s the wrong approach for developing talent.

“I try and play a more international game because that’s the game,” says Porter, a fan of the free-flowing style employed by Spanish giants Barcelona. “If I’m subbing guys in and out, I’m saying that it’s more important to fabricate energy, fabricate fitness, fabricate managing the game tactically. There’s a reason the game wasn’t meant to be played that way.

“They need to understand that there’s a rhythm to the game. Those are the little things that I teach them that hopefully helps them move on to the next level because they’re more ready.

“If you’re going to defend for 90 minutes, players aren’t getting better.

“For me, winning is important but it’s not good enough just to win,” he adds. “Win with sexy football.”

Porter, who reportedly received interest from an MLS club to take over coaching duties, just signed a 10-year contract with Akron. Professional soccer may ultimately be in his future but for the moment, the face of Zips soccer is happy in Ohio, developing players and growing the game any way he can.

“I like that college is still an important step and I like the fact that I can take young, future pros and develop them and mold them not only on the field but off the field,” he says. “I feel like I’m playing a big part. And I like the rewards of that age.