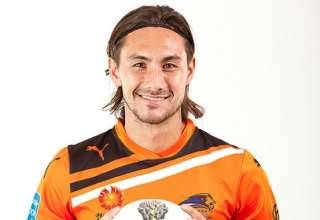 The streak is over.

After scoring two goals last weekend to help the Brisbane Roar set an Australian team-sport record with its 36th consecutive game without a loss, Calgary’s Issey Nakajima-Farran and his teammates fell 2-0 to Sydney FC, Sunday.

Sydney’s Dimi Petratos scored just 36 seconds after kickoff and was up 2-0 before the 20-minute mark, thanks to a shot from former Blackburn Rovers’ regular Brett Emerton that took a deflection and was credited as an own goal.

Nakajima-Farran had a tough day, as he was subbed off after 58 minutes.

Sydney is a mid-table club in the A-League, so its result of the Roar constituted a major upset. The Roar had gone more than a year without a loss.

Nakajima-Farran signed with Brisbane ahead of the 2011-12 season and has three goals this campaign.