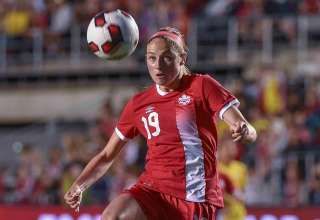 Canadians hunched at their desks watching the stream, Canadians who knocked off for extended breaks at the pub, Canadians nervously watching in their living rooms… they could all sing on Wednesday afternoon.

Basically, anything that could go wrong for the Canadians did end up going wrong, and they still won.

The Canadians got their dream start. Just seconds after the opening kickoff, Christine Sinclair and Janine Beckie found themselves on a two-on-one break. Sinclair slotted the ball across the penalty area for Beckie, and the ball was slammed into the goal.

At the 20-second mark, before the nerves had time to settle, Canada had a one-goal lead.

But, in the 16th minute, with the confident Canadians pressing, Australia broke on the counter. Australian forward Sam Kerr rode a challenge from Canadian defender Kadeisha Buchanan, which then sent her side on a two-on-one break. But Kerr, inexplicably, decided to try a shot from outside the Canadian penalty area, and the tame effort was easily stopped by Canadian keeper Stephanie Labbe.

Two minutes later, the Australians hit on the counter again. This time, Michelle Heyman got a couple of steps on Canadian centre back Shelina Zadorsky. The Canadian got her hands all over the Australian attacker, Heyman went down, and Zadorsky saw a red card for the last-defender-back professional foul.

With the ensuing free kick, Elise Kellond-Knight hit the bar.

All before the 20-minute mark, and you didn’t have time to take a breath.

The Australians pressed. They shot wide. They had breaks that were foiled by shots that were sent directly at Labbe. Another chance was foiled by a brave tackle from Rebecca Quinn, who had come on to take Zadorsky’s spot in the back line.

But, at the 70-minute mark, the Australians still hadn’t broken the Canadians, and then began to give up chances, as well.

Canada was gifted a 73rd-minute penalty after a controversial handball call. Replays showed that a Canadian corner kick had gone by a couple of Australian defenders who had waved their arms in the air, but neither had actually touched the ball.

Beckie, who converted the opener, was given the nod to take the penalty rather than Sinclair, Canada’s all-time leading scorer by miles and miles (oops… kilometres and kilometres). Beckie’s penalty was easily saved by Australian keeper Lydia Williams.

That was the last highlight of the game for Williams. There would be lowlights, though. Just a couple of minutes later, she let a shot from Jessie Fleming clang through her legs, and a last-second goal-line clearance saved her from embarrassment.

But, Williams wasn’t done; after Sinclair got the ball on another break, Williams made the strange, Rein Baart-like decision to come 40 yards off her goal line to try and stop the play. The ball bounced off her, back to Sinclair, and the Canadian then launched the ball into an open goal.

With Germany and Zimbabwe also in the group, the opening win is massive if Canada is to achieve a top-two finish and avoid the dreaded third-place wild-card lottery.

The Australians struggled early, looked exhausted late in the match. It looked as if Canada’s fitness level was miles ahead of the Australians. And it played a major part in Canada’s surge in the final 20 minutes.